Home Uncategorized First Look: How the new Ecco Buckhead is different from the Midtown...

After several months of construction, Ecco Buckhead will open its doors on Tuesday, November 13. The third outpost of this Fifth Group restaurant is a departure in design and menu offerings from the original location in Midtown.

Located at 3586 Peachtree Road, the newly constructed building stands alone next to Phipps Plaza. Where the Midtown space has an intimate ambience with dark tones and muted lighting, the new space sits at 9,500-square-feet with lofty ceilings and bright lighting fixtures to create a more open atmosphere. Vajra Stratigos, Fifth Group’s director of food and beverage standards, says the new location’s design is a grander expression of the original’s features, including a larger bar. The new location also features a patio that sits below Peachtree Road but with enough greenery that you might not notice traffic whirring by.

For Fifth Group, the decision to open a third location in Buckhead was an easy one. “I think it’s just a matter of being well-represented across the city,” says Stratigo. “[We think] people in this part of Buckhead appreciate this type of food and service, this kind of ambiance and setting.” In a neighborhood chock-full of steak restaurants, Stratigo feels that Ecco sets itself apart by not leaning toward to one particular cuisine. “I really feel like it’s about our range of food, [which has] a lot of inspiration taken from different European countries,” he says. “We’re not boxed in as an Italian place or a steakhouse, so that latitude and flexibility really sets us apart.”

Executive chef Andrea Montobbio says the most exciting part of designing the menu has been “being able to really venture and develop dishes that are not 100 percent in Atlanta yet. We’re able to bring elevated dishes that I believe you can’t find [elsewhere in the city].”

While the Buckhead location’s menu is different from Midtown’s, the beloved fried goat cheese with honey will still be available. Other dishes to expect include raviolo with runny egg yolk in the center, along with smoked ricotta and chives; black squid ink flatbread dressed with cuttlefish, olives, caper berries, and tomatoes; and yellowtail crudo with tuna heart shipped in from California. “We actually had one of our people go there, get the tuna heart at the dock, and they shipped it to us overnight, and we salted it and cured it.” Look for dishes to have Moroccan and European influences as well.

The cocktail program highlights gin as a nod to the spirit’s prominence in European culture. “Gin ties back to a very strong bar culture in Europe,” Stratigos says, “It’s kind of like the convivial spirit. It’s the spirit you can do a lot with and that has many different versions.”

Ecco is the second of three Fifth Group concepts headed to Buckhead. The first was South City Kitchen, which opened on Peachtree Road last year, and next will be Alma Cocina, which is expected to open in 2019.

View the full menus below. (Tap to enlarge.) 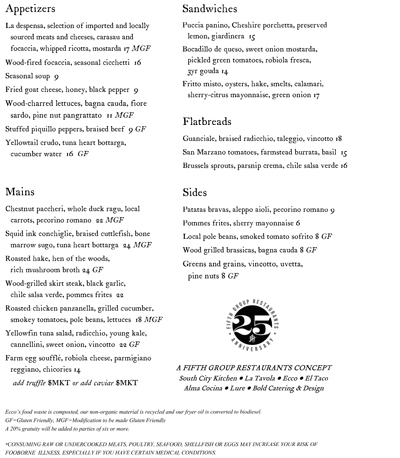 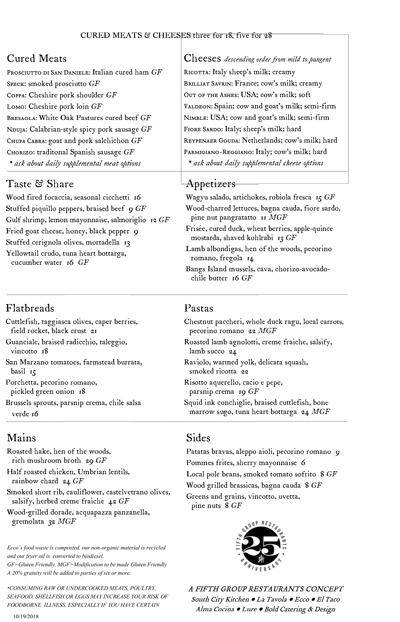