It has been almost a year since star chef Cyrille Holota decamped from the now-closed FAB and moved, literally, across the street to helm Atlanta’s outpost of BLT Steak at the W Downtown Atlanta. Since joining BLT, the classically trained Holota, who worked at several Michelin starred restaurants before joining Joel Antunes at Joel, has added a sense of elegance to the high-end steakhouse. Holota, a native of Montluçon, France, recently completed the first of a series of boucherie (French for “butcher”) dinners, which highlighted whole-animal cookery in five-course meals. Holota recently chatted about why he has remained in Atlanta and some of his future plans for BLT Steak.

Q: With all of your international experience and reputation you could have had a top position anywhere in the world, what motivated you to stay in Atlanta after Joel closed?
CH: Atlanta is a wonderful city that can be family friendly, and I have found some very nice dishes in the restaurants around Atlanta. As well, Atlanta is a town that is rapidly growing in terms of the food industry. We are lucky enough to have several local farmers who are doing a fantastic job in supply us with extremely fresh fruits and vegetables.

Q: What attracted you to BLT Steak and what inspired you to create the Boucherie series?
CH: BLT Steak has a great reputation in the industry, as chef Laurent Tourondel brings his personal touch to each property. The Boucherie series, specifically, is a great way to showcase some of our local ingredients as well as our local artisan talent. We are currently working on the next series of dinners and playing around with a few new recipes, which will be announced soon.

Q: Many chefs have said that they enjoy music in their kitchens because it helps them to relax, do you listen to any music while you are cooking?
CH: No, I do not like to listen to music while in the kitchen because I find it to be distracting while trying to communicate and coordinate with the rest of the kitchen staff.

Q: What are some of your favorite restaurants here in Atlanta?
CH: Some of my favorites around Atlanta are Bacchanalia, Muss & Turner, and Douceur de France.

NEWS AND NOTES:
StarChefs.com has announced its 2012 Atlanta Rising Stars, which include Andy Carson, chef de cuisine at Bacchanalia and Ryan Smith of Empire State South, and Robert Phalen of One Eared Stag. Check out the full list.

Harold’s Barbecue, an Atlanta institution, announced last week that it would close Thursday ,May 3, after 65 years. However, veteran journalist Jim Auchmutey reported to food editor Bill Addison yesterday that, at a mobbed lunch yesterday, a staffer told Auchmutey the restaurant would stay open for another month after a deluge of business. We’ll keep you posted on developments.

Buckhead. According to the Atlanta Business Chronicle, Del Frisco’s Grille has officially inked a deal for the former Craft space in front of the Mansion on Peachtree/soon-to-be Mandarin Oriental Atlanta.

Downtown. On Tuesday, May 1, the Municipal Market (home of Sweet Auburn curb market) on Edgewood Avenue will celebrate its eighty-eighth anniversary in the same location and the completion of major renovations. The official ribbon cutting will take place at 11 a.m.

Studio 7, a Jamaican resto, lounge and art gallery, is slated to open in May at 393 Marietta Street, the former Endunu spot.

Inman Park. Concentrics Restaurants announced last week that Eddie Russell of the FourCoursemen (a group of seven who host five-course dinners for 28 guests every few weeks) is the new executive chef of Parish. Russell was previously the pastry chef at Five & Ten in Athens and executive chef at another notable Athens eatery, Farm 255.

Vinings. Café Pharr is slated to open its fifth metro location in Vinings by June

Westside. What Now Atlanta is reporting that Chipotle has filed for a building permit to open a store in the Howell Mill Village shopping center.

Question of the Week: What nationally renowned ATL dining scene star was presented with a prestigious award for “sterling service” to the industry by Food Arts magazine its April 2012 issue? 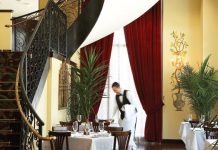 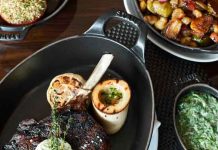