Last week the team behind the forthcoming Watershed on Peachtree revealed Julia LeRoy would become the kitchen’s chef de cuisine, working alongside executive chef Joe Truex. LeRoy, a graduate of the Culinary Institute of America, has pursued a diverse cooking career: She cut her teeth at the Dining Room at the Ritz-Carlton Buckhead and Seeger’s and led the kitchen previously at the Bookhouse Pub and her short-lived LeRoy’s Fried Chicken. Just prior to her new post at Watershed, she worked as the consulting chef for the menu at Decatur’s Pinewood Tippling Room, which opens on May 15.

Q: What were the deciding factors in making the decision to join the Watershed team?
JL: I think one of the main reasons I wanted to join the Watershed team is because I have enormous respect for Joe’s approach to food. I would dine at Repast any time I could talk someone into taking me and I think he’s done a great job transforming the new Watershed menu into his own. He and I are opposites in a lot of ways, but we get along really well and I think that shows in our collaborations.

Q: How did you meet Truex?
JL: We were on a panel together at the 2011 Taste of Atlanta and started talking then. I was in the middle of shutting down my fried chicken restaurant and kind of stressed. We talked after the event and found out we had a food ideas in common. We worked together almost a year doing dinner parties before I decided to join the Watershed team.
I signed the contract on my birthday, April 20th.

Q: What are some of the new items you will be introducing to Watershed’s menu?
JL: I’m not ready to divulge the fruits of those collaborations yet, but I think you’ll be pleased. But Joe and I plan on expanding Watershed’s current menu with flavors from the Georgia Coast, the Louisiana Bayou and the diverse ethnic flavors found throughout the South.

Q: You have been serving as consulting chef to the Pinewood Tipping Room in Decatur, how is that project coming along?
JL: I have wrapped up the menu [which includes dishes like fried bologna sandwiches gussied-up funnel cake], and it is similar to the food I prepared at Bookhouse.

NEWS AND NOTES:
The biggest news of the week, of course, is that Hugh Acheson and Linton Hopkins tied for the title of Best Chef Southeast at this year’s James Beard awards announced on Monday. ( On Friday, at the ceremony for cookbooks, journalism and broadcast media, Acheson also received a Beard award in the American Cooking category for his cookbook, “A New Turn in the South.”

The founder of R. Thomas Deluxe Grill, Richard Thomas, was featured  in a Huffington Post piece about his personal journey from President of KFC to founding what the article calls “Atlanta’s healthiest restaurant”.

The Southern Food Writing Conference and the International Biscuit Festival will be held jointly in Knoxville, Tennessee on May 17-18.

Atlantic Station. Local Asian food truck Yumbii and Cafe at Pharr are hooking up to open a pop-up eatery in the space formerly occupied by the Grape at 19th Street and West District Avenue from June 1 until August 5, according to the AJC.

Brookhaven. After nine years heading up the kitchen, Chef Steven Herman has been named a partner at Haven.

Buckhead. Guests at Phipps Plaza’s movie theater will soon enjoy AMC’s newest concession model, The Marketplace, according to the Atlanta Business Chronicle. Instead of waiting in long lines to order their food and beverage choices, the concessions are laid out at convenient stations, allowing guests to choose what they want before proceeding to the checkout area. In addition, AMC plans to install a MacGuffins bar, allowing guests to order a beer, wine or cocktail at the theatre. Named after a term coined by famed filmmaker Alfred Hitchcock, MacGuffins features a variety of beer, wine and cocktails, including frozen and specialty drinks.

College Park. The Ranch, a bar and grill featuring steaks, wings, sandwiches and other casual eats along with eight VIP rooms, has opened at 5456 West Fayetteville Road.

Downtown. The Green Market in the Peachtree Center courtyard has kicked off its 2012 season. It will be held every Thursday from 11:30am to 2:30pm through October. Vendors include LefTeas, Organic Mountains Honey, King of Pops, H&F Bread, Abundant Harvest Gardens produce, and Antico Mercato Artisan Cheeses. Live music will also be featured.

Kirkwood. Creative Loafing notes that Le Petite Marche is moving across the street from its current location in 2013 to a retail development at 1986 Hosea Williams Jr. Drive that will allow them to offer more space and parking along with an expanded menu.

Midtown. The Atlanta Botanical Garden’s Well Seasoned Chef series has begun. The cooking demonstration program has a stellar lineup of local chefs and takes place from May through October in the Edible Garden’s outdoor kitchen and features four-part tasting menus using produce harvested from the Edible Garden. Some demos with celebrity chefs like Kevin Gillespie and Kevin Rathbun are already sold out.

Serenbe. Chef Garrett Marsteller, most recently at Abattoir, has joined the team at The Farmhouse.

Westside. For the seventeenth consecutive year, Bacchanalia was rated the number one restaurant in Atlanta by the Zagat 2012-13 Atlanta Restaurant Survey.

Question of the Week: What Westside shop offering handmade bon bons is slated to open this month?

PS. The answer to last week’s QOTW—What nationally renowned ATL dining scene star was presented with a prestigious award for “sterling service” to the industry by Food Arts magazine its April 2012 issue?—is Bill Johnson of the Johnson Studio. 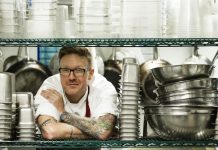