Cakes & Ale’s hotshot new hire, Eric Wolitzky, who has only been on the job for three weeks, took some time last week to chat about why he left New York to come to Atlanta and what he has added to the menu at the lauded Decatur resto.

Wolitzky, who previously served as pastry chef for Baked, a celebrated bakery and cafe located in the Red Hook ‘hood in Brooklyn, where his focus was updated classic American comfort desserts, has been hired by Cakes & Ale to not only lead its bakery team but be in charge of the dessert menu as well.

The Rochester, New York, native, who was born into a family of bakers and has been working in kitchens since his teens, has a culinary degree from the French Culinary Institute as well as a BFA in drama and MA in performance and cultural studies from NYU’s Tisch School of the Arts.

Wolitzky’s recipes have been featured in Food & Wine, Bon Appetit, O Magazine, and Daily Candy, and he has presented desserts at the New York Chocolate Show, Martha Stewart’s Milk and Cookies, Food Network Food and Wine’s Sweet, and the Village Voice’s Choice Sweets.

Q: With the success you enjoyed in New York, what brought you to Atlanta and Cakes & Ale?
EW: A move to Atlanta has always been in the back of my mind. I have great friends here and have always loved how nice everyone is, how people smile back at you when you walk down the street. It makes my hard, New York edge start to melt away. I also enjoy how people respond to food in Atlanta. When they like a dessert, they are appreciative, want to talk more about it. That’s exciting to me. Cakes & Ale happened because Billy and Kristin were looking for someone who would not only grow a bakery, but also produce desserts for the restaurant. I never wanted to lose the baker in me—but I also wanted to grow and expand my repertoire. This was the perfect opportunity!

Q: You’re in charge of both the bakery program and the restaurant’s desserts. What immediate changes have you made and what can we expect in the long run?
EW: I’ve made a lot of changes in the short time I’ve been there. I wanted to make sure that every item out there could stand on its own; even if it was a cookie, it would be fantastic. There is a big focus on flavor as well as seasonal ingredients—just like the restaurant. It’s kinda funny, but I also increased the size of a lot of things. I think you should get a lot of bang for your buck in a bakery. Among other things you will definitely notice a new croissant, an amazing New York coffee cake, danish with homemade jam, my “famous” chocolate chip cookie, and a slew of big, bold layer cakes. The fresh mandarin orange creamsicle cake is already a hit. And now you can order celebration cakes in advance! The restaurant menu is filled with items that I have been dying to put on a menu for a long time. For instance, my pineapple upside down cake served with salted caramel and cherry ice cream (the cherries are stewed for an hour with brandy, orange, and cinnamon). Also you will see my version of Mississippi mud (chocolate cookie crust, flourless chocolate cake, chocolate pudding, and stout whipped cream) and a very cool triple layer ice cream cake. Expect to see plated desserts that focus on bold (but not too rich) flavors rather than ones with multi components. I don’t believe in a lot of excess.

Q: What are your favorite kinds of desserts personally?
EW: I love working with dough and love playing around wtih yeasted items like danish, croissants, and brioche . . . so many things you can turn brioche into! I also will never turn down a nice slice of cake on a plate.

Q: Have you had a chance to try any Atlanta restaurants yet that you’ve enjoyed?
EW: I haven’t really had a chance to get out a lot, but have enjoyed Holeman and Finch, Woodfire Grill, the Shed, Bacchanalia, Farm Burger, and Casseroles.

NEWS AND NOTES:
Concentrics Restaurants and Flip Burger Boutique announced that they will partner on operations, marketing, public relations and future expansion.  According to Concentrics’ PR staff, they are also consulting on HD1 and handling all of their PR/Marketing. “We are currently not involved in operations there like we are at FLIP.”

Linton Hopkins was one of five chefs nationwide who were asked by Eater to comment the importance of starred reviews in the wake of the recent announcement—and resultant feedback from critics, food fans, and others—that the LA Times would discontinue the practice. Hopkins’ comments presented a thoughtful analysis of why he believes
that starred reviews have merit.

Seasons 52 announced their spring 2012 menu at a media event simulcast through all twenty-one locations in the United States. Senior Culinary Director Cliff Pleau and Master Sommelier George Miliotes, MS, speaking from Florida,
introduced several of the new dishes and accompanying wines that will grace the menus of both Atlanta locations.

Buckhead. The Cheyenne Grill in the Peachtree Battle shopping center is changing its name to the Whitehall Tavern, according to a report in the Amateur Gastronomer.

Decatur. Atlanta Dish is reporting that No. 246 will be closed from Sunday, March 25, until 6 p.m., Friday, March 30, due to it being reserved by the filming of the Amy Poehler–Adam Scott movie “A.C.O.D.”

Midtown. We hear that the new cocktail spot designed by Seiber Design at the Georgian Terrace Hotel will be named Proof & Provision. It will feature barrel-aged craft cocktails, an extensive selection of beers and seasonal bar snacks, including locally-sourced charcuterie in the 3,000 square foot former Basta space.

Bantam and Biddy is the name of Shaun Doty’s new resto that is focused on chicken.

Noted New York chef Suvir Savin will be conducting a demonstration and class from his new cookbook, Masala Farm at Cook’s Warehouse Midtown on April 5th from 7 to 9 p.m.

Westside. Eater Atlanta is reporting that Community Q’s long anticipated second location will be at 810 Marietta Street in the former Burger Joe’s spot “sometime after June.”

Question of the Week: What ATL resto that is nationally lauded for its take on New South cuisine is now being recognized for its coffee?

P.S. The answer to last week’s QOTW—Who is being tapped by Ford Fry to helm the Optimist?—is Adam Evans, Chef de Cuisine at JCT Kitchen. 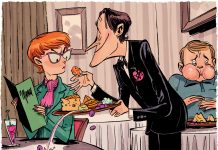 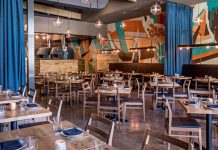 Why some Atlanta restaurants are ditching OpenTable 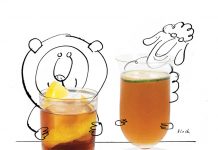 Of lambs, lions, and libations: Two cocktails to start and end March