To say that Fifth Group Restaurant president Robby Kukler has been busy lately is like saying that Paula Deen enjoys butter. He has recently opened up Downtown restaurant Alma Cucina, successfully competed for four spots at Hartsfield-Jackson International Airport, and is in the construction phase of his latest venture, Lure, a Midtown seafood restaurant opening this summer in the former Vickery’s spot. Kukler chatted in a recent email interview about what is on the horizon for 2012, the airport ventures, and how his team plans their projects.

Q: With the opening of Alma Cucina, 2011 was a busy and successful year what’s on tap for 2012?
RK: After three years of creating and planning we’re thrilled to finally have Lure under construction, with the projected opening date of early July right around the corner. Simultaneously, we have all of our leadership working on four new restaurants in Hartsfield-Jackson International Airport, with individual openings spread throughout the year. This includes a full-service Ecco and an El Taco opening in the new International Concourse first, followed by another El Taco and a just-for-the airport concept called Satchel Bros. Deli & Pickle Bar. Satchel Bros. will feature the world’s most delicious sandwiches with offerings of beautiful pickled vegetables, salads, soups and other international side dishes—envision Dean & Deluca meets old world deli with a Fifth Group Restaurants culinary twist!

Q: What is your process for developing a new restaurant concept and then bringing that concept into fruition?
RK: We always have a short, working list of concepts that interest us from a food and overall dining experience perspective. Some we think are more viable than others based on a long list of variables, but they all intrigue us for one reason or another. Once we find a location that, again, fits all—or most—of our criteria (i.e. size, character, parking, neighborhood, economics, revenue drivers, etc.) my partners, Steve Simon and Kris Reinard, along with two long-term company veterans, Stuart Fierman and Vajra Stratigos, spend a considerable amount of time discussing and brainstorming about the restaurant we are envisioning. We are strong believers in collaboration and the power of many ideas and perspectives. This helps to create a clear vision of what the restaurant is eventually going to be. It helps drive the décor and design, form and function and, most importantly, the guest experience. We want to create restaurants that are timeless and understated, but exciting, fresh and new all at the same time. It is part of Fifth Group Restaurants mission to impact our city’s dining reputation each and every time we open a restaurant.

Q: How did you decide to bid on the airport project(s)?
RK: We’ve been working on the airport project for almost two years. In the first year, we did tremendous amounts of due diligence to learn about this part of the hospitality industry, how operations are different than what we’re used to and identifying those that are the best in the business. After completing that process, we feel it is a great opportunity to share our brand of hospitality with guests from all over the world. We have partnered with industry veterans HMSHost for this project, which is one of the largest and most successful concessionaires in the world, specializing in both licensing restaurant concepts as well as operating their own restaurants within travel terminals (planes, trains, and automobiles) around the world.

Q: How involved will you be in the management of the day-to-day operations of the airport Ecco?
RK: We will be extremely involved with hiring and training a great team of managers, chefs and employees to open and run all four of the Fifth Group restaurants in the airport, under the wing of HMSHost. Although we will not be running the restaurants directly, we will be working hand-in-hand with their team on a regular basis.

Q: What trends do you see emerging on Atlanta’s dining scene in 2012?
RK: I do believe we will see other seafood restaurants opening this year, with some focusing on sustainable seafood when possible like Lure. The idea that people want to eat lighter and healthier—paired with the fact that, for a city of its size, Atlanta does not have a plethora of quality-minded seafood restaurants—will drive this trend. I think sustainability and origin of source—for both food and beverage—will continue to be a restaurant focus as well, because it is increasingly more important to our guests. I also feel we will see the continued trend of more casual, unpretentiously designed restaurants with seasonal, chef-driven menus, but I think we will see the simple presentations and platings become a bit more elevated. There will be a blending, or even fun juxtaposition, of elements from the more casual neighborhood spots we’ve seen over the last couple of years with the food and presentations of past fine dining. With that said, on the flip side, there will also be more, out-of-the-way, down-and-dirty, food and cocktail driven “joints” opening in unexpected locals.

Bon Appetit dedicates its February issue to the South, including a great read on the Nashville food scene by Atlanta native Andrew Knowlton, the magazine’s restaurant and drinks editor.

World-renowned chef Jose Andrés, along with Harvard Physics Professors Michael P. Brenner and David A. Weitz, will lecture on the science of food on Saturday, March 10 in the Wayne Clough Center at Georgia Tech. The event, titled Squishy Physics, is free but registration is required.

Share Our Strength will host the Great American Baking Contest on Wednesday, February 29, 2012, at Le Cordon Bleu College of Culinary Arts Atlanta. The event will feature professional pastry chefs, amateurs, culinary students and children vying to win the title for “Atlanta’s Best Dessert.”  All proceeds will benefit Share Our Strength, a national nonprofit organization working to end childhood hunger in America by 2015.

Buckhead. According to the Atlanta Business Chronicle, the Yacht and Polo Club, the semi-private club that moved into the former Anthony’s spacesix months ago, has left the building and is in the process of entering into an agreement with Anthony’s landlord to assign its lease to a third party.

The AJC is reporting that posh sushi spot MF Buckhead is going through a “major reorganization:”

Downtown. Diners at Alma Cocina who eat lunch or dinner on Tuesday, February 14 will have 20 percent of their tab donated to “Atlanta’s Table,” Atlanta Community Food Bank’s prepared and perishable food rescue project.

Midtown. Jeffrey Bruce Baker Designs, an Atlanta-based design firm, is the architect for the Peasant Group’s new Italian resto and bar, Campagnolo, slated to open in the former Nonna Mia spot at 980 Piedmont Road in February. The firm’s rendering shows a clean, modern design that features a large patio area in the front of the resto.

Poncey Highland. Epicurious.com include HD1 chef Jared Lee Pyles in its list of single chefs around the country and their perfect Valentine’s Day dinner menu.

Ormwood Park. Endulge Cupcake Boutique, a locally owned, independent gourmet bakery, is slated to open in February at 749 Moreland Avenue in the former Little Cafe Paris spot. According to the owners, operating hours will be from 11 a.m. until 7 p.m. daily.

Question of the Week: What Atlanta chef is spelling out his culinary philosophy with a line of tee shirts?

PS.  The answer to last week’s QOTW—What ATL food truck was named by a national publication as having some of the most creative food truck cuisine?—was Yumbii, by US News and World Report. 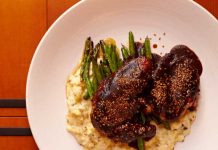