Home Uncategorized For novice foragers, mulberries are an easy hit

Early last Sunday morning, two authority-flouting neighbors and I set out to explore an edgy angle of the local food movement: foraging.

Armed with ladders and buckets, Ruth and Charlie and I aimed to discreetly denude a nearby mulberry tree of its ripest fruit.

If we had thought we were going to quietly ease into this whole foraging thing, we were mistaken.

When we had made our plans, 7 on a Sunday morning seemed early enough to allow us to pick some fruit without drawing too much attention. But the problem is, it’s hard to be sneaky about anything when you’re doing it on the major thoroughfare of your community. Especially when you’re standing across the street from the local coffee shop.

So there we were, on Ponce de Leon Avenue in Decatur, climbing ladders under the mulberry tree next to the post office and kitty corner to Dancing Goats. We had all the attention we could have wanted from early risers, joggers, dog-walkers and coffee drinkers.

To be fair, we’re not the only people in Atlanta helping themselves to a little free fruit. Concrete Jungle, a friendly group that donates what it picks off public fruit trees, launched its harvest season last weekend at a few mulberry trees around Cabbagetown, co-founder Craig Durkin told me. (Admittedly, Concrete Jungle’s mission is more noble than ours, as one of its members planned to turn 9 pounds of mulberries into jelly for Mercy Community Church. We just wanted to eat.)

Most passers-by silently looked up at us as they stepped clear of our ladders. Some determinedly ignored us. Only one spoke to us.

“I have to ask,” she said as she crossed the street with her coffee. “What do you do with the stems?”

This was a kindred spirit. And it was a good question.

“I don’t know yet,” I confessed, looking into my bucket filled with black berries still attached to little green stems. “I’m thinking I’m going to press them through a food mill and make jelly.”

In about an hour, the three of us had gathered about two gallons of mulberries—enough for a small batch or two of preserves and a pie. Ruth and Charlie took a few berries for their breakfast cereal and then generously handed over the rest to me. “This harvest is all for you,” Ruth said. I owe them big-time.

Back home, I read online that the stems “just disappear” when you cook them with the fruit. So, I made mulberry-lemon jam with whole fruit. It’s quite tasty, but it’s a little rustic—dense and seedy. (The food mill should arrive by the end of the week.)

But the Mulberry Pie was a real winner. Because the fruit remains mostly whole, the seeds are not as evident, and because mulberries are mild and sweet, the filling does not require a lot of sugar. And though I did trim away many of the stems with a kitchen shears, for aesthetics, they really do not affect the texture or flavor of the pie—so you can just ignore them, Nice Lady Who Asked.

Want to pick your own? Mulberry trees are all over metro Atlanta. Look for the telltale purple stain on the sidewalk below the trees, or just listen for the chatter of happy birds. And be sure to try the fruit before you go to too much trouble … not all mulberry trees are equal. The ripe, black fruit should be mild and sweet, not bitter. Better yet: Join Concrete Jungle this Sunday and pick for a good cause. The pick will begin at the reasonable hour of 9 a.m. E-mail for location details: info@concrete-jungle.org 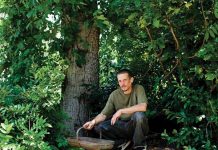 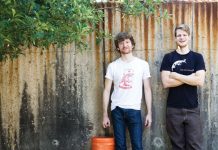