Home Drinks High on the Vine: 18 grueling hours with the Court of Master... 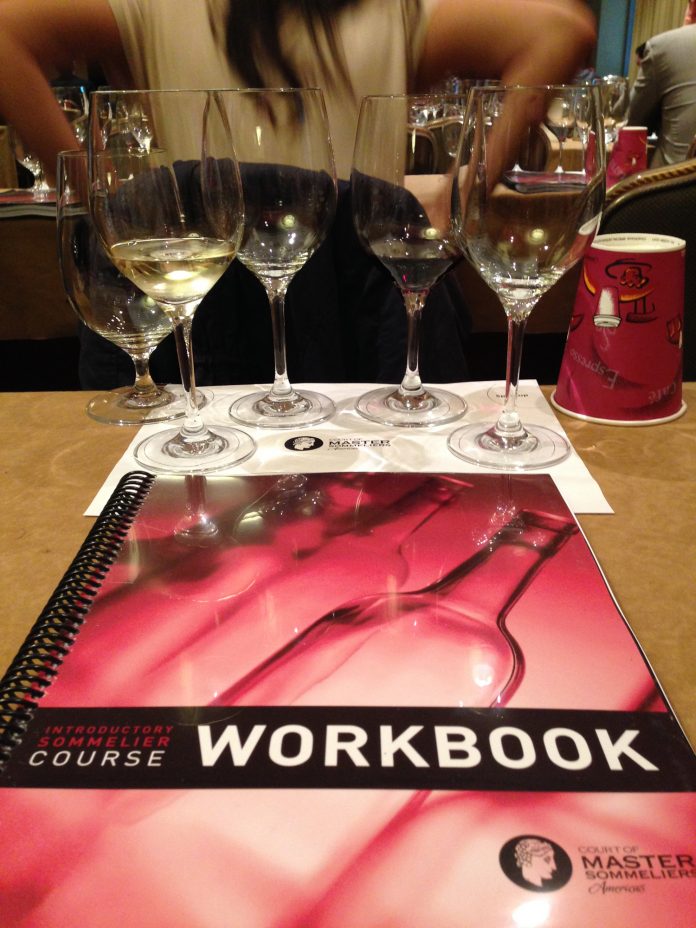 It’s 8:15 on a Tuesday morning, and I’m standing among 100 or so people swirling wine in a glass and holding a microphone in my other hand. Shoulders slouched back, eyes fighting to stay open, I mutter my best guess into the mic. “This wine is clear, bright, with a brick red core and a medium concentration. Medium plus viscosity.”

A man wearing a sharp gray suit with a small red pin on his lapel walks toward me. “Is it really brick red?” he asks. “If you drive around Buckhead, how many different colors of brick do you see?”

I am too tired to know better. “I don’t know. One color?”

“NO,” he fires back. “Say that this is more ruby red or garnet. Red brick is generic.”

I sit back down, and the tasting continues.

There was once a time when I studied wine maps and memorized soil composition for fun. While still a teen, and a thirsty, knowledge-obsessed geek, I dug deep, trying to grasp a concept that seemed as complicated as any school subject I had encountered. As a senior at Emory, I took the next step and spent several hours each week as an intern, learning under the high heels of Perrine Prieur of Perrine’s Wine Shop. At various points, I wondered if becoming a sommelier could be a career. Hey, it’s wine, and what sounds better than drinking and pouring it for a living? These days, sommeliers can be as much the star as the chef. Think Aldo Sohm at Eric Ripert’s Le Bernardin.

But people like Sohm are stars because they’ve also passed the most difficult test you’ve never heard of. Founded in 1969, the Court of Master Sommeliers established a rigorous four-tiered test to raise the level of service in restaurants. Only around 200 have passed all four levels (introductory, certified sommelier, advanced, and master).

And this brings to me earlier this week.

Sales reps for wine distributors and aspiring sommeliers from local restaurants sat for their level one examination Monday and Tuesday at the InterContinental Hotel in Buckhead. Prior to the exam, several master sommeliers conducted an intensive overview of key material.

It was hardly a review, as we rampaged through 150 pages of details in sixteen hours covering everything from the schisty soils of France’s Rhone Valley to the windy corners of Tasmania in Australia, in addition to the basics of beer, sake, port, sherry, and spirits.

To keep us on our feet (literally), the masters blind tasted us throughout the two days—20 wines total—and had groups of five stand up to evaluate publicly. If public speaking terrifies you, try sniffing a wine in a room full of professionals and announcing that you smell crushed shell fossils, under-ripened pineapples, and candied lemon peels.

My mind started to flatline somewhere around day one, hour eight in the southern island of New Zealand. I was so tired that by the time I remembered to eat dinner, I had already crawled into bed. My head felt heavy, and if there had been a way open my cranium and pour something out, I would have done it.

Come Tuesday, I felt like soggy toast, a poor condition to be in when you’re learning about the Mosel Valley in Germany and staring at a map that reads like a page of anagrams: Erdener Treppchen, Urziger Wurzgarten, Brauneberger Juffer Sonnenuhr. By which point, you’re lost on what’s being said: “Did the master just say that you can make a Spatburgunder into an Auslese but still keep it Trocken?”

When it came time to take the multiple choice test, I was almost too tired to care. Almost. After hours of cramming and tasting and sitting and listening, I still wanted my red pin. In the end, I got it but at a cost.

An aggressively competitive individual, I realized that when I first flirted with the idea of becoming a master, I was seduced primarily by the fact that few had succeeded. But watch the documentary Somm, which follows several advanced level sommeliers training for their masters. Driven by something more than just a passion for wine, competition, and glory, those people are the real candidates—they’re basically hammerhead sharks dressed as human beings.

Is it a deep, near-sadomasochistic obsession that propels such people to memorize every vineyard in Slovenia? Is it true love? I don’t know, but I can say that if you think you want to become a master, take that first step, and sign up for the intro course. You’ll quickly find out what separates the grapes from the gravel. 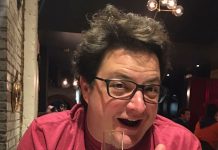 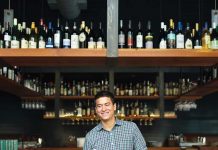 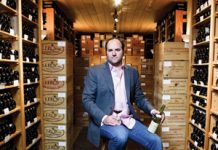