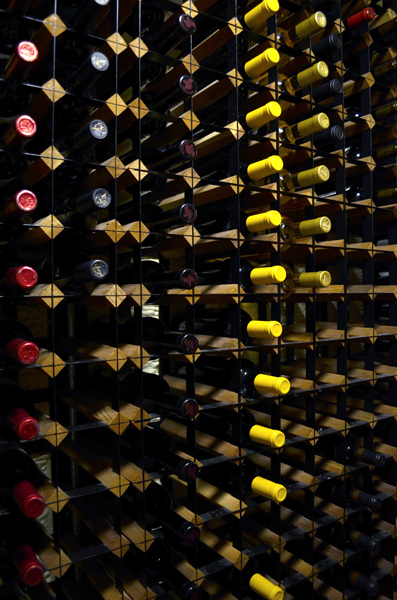 It takes a lot of guts to cellar wine, the costly process of laying down bottles, letting them age, and waiting years before selling them to customers. Few have the confidence (business can tank quickly). Few have the money (thousands of dollars just sitting on a shelf). Few will commit the space (a room full of bottles replaces a room full of paying customers).

Bone’s is one of these few.

Susan DeRose and Richard Lewis opened this old-school steakhouse back in 1979 along a stretch of Piedmont Road in Buckhead. Over three decades they expanded and renovated, and today they are the oldest (and best) steakhouse in the city. They also have one of the largest wine collections in town, rivaled, perhaps, only by Cherokee Town and Country Club.

Recently, I visited Bone’s to see the collection—which was sitting at 20,105 bottles as of May 18—and to talk with Robert Reno, the restaurant’s wine buyer. The pictures we snapped hardly capture the complexities of storing so much wine in such little space. Basically, wherever there’s a gap or a hole, there is wine: cabinets in the front, refrigerators at the upstairs and downstairs bar, in the walls along the wine gallery, through the kitchen in a backroom, in the warehouse next door, underneath work tables, and, at one point, underneath the stairs. Organization is critical because you wouldn’t want to misplace, say, a $5,000 bottle of Domaine de la Romanee-Conti (2007).

Below, some stats about the cellar, and a chat with Reno, who has helmed the wine program since 2009.

Most expensive bottle ever sold at Bone’s
6-Liter bottle of Opus One, $3,660

Most wine a party has consumed in one sitting
A party of eight, eighteen bottles

What trends are you seeing in wine choices at Bone’s?

I think this speaks to the city as well, but our wine culture, in general, is twenty to twenty-five years behind the Northeast. I think a lot of that has to do with the fact that the city was burned to the ground. I know from talking with friends who work in Boston, New York, and Chicago that they sell a lot more white wine and Champagne than us.

In 2007, we were starting to see a lot of exploration with that here. People were trying off-varietals of white wine—Albarino, Chenin Blanc, Viognier. I think that’s where the economic collapse [of 2008] stunted exploration. At that point, people seemed to draw back into their shells, and you ordered a brand name—Silver Oak, Jordan, Caymus—wines that you felt comfortable with. That exploration is starting to come back this year, even just trying other Cabs that aren’t as well known.

Yes, predominately domestic wine. We sell mostly California Cabs, which makes sense being a steakhouse. I use to fret over the fact that people would order a Napa Cab with their seafood appetizer until someone told me, “Well, they came straight from the bar where they were drinking whiskey.” So really, how much were they going to enjoy that Riesling instead?

Which wine on this massive list offers the greatest value?

It’s all relative, and there are great bottles that are less than $40, $60. We’ve got some Cote Rotie that we haven’t raised the price on since 1999. They aren’t cheap—they’re $300—but they should be more expensive. But today, right now, I’d order the 2006 Chateau St. Michelle “Artist Series Meritage” ($120). Out of all the grapes for Chateau St. Michelle, the head winemaker gets his pick of the best. It’s super well-balanced, velvety, blackberry, cocoa, coffee, and tar.

You’re surrounded by all these great bottles of wine. Is there anything you wish you had?

’45 Bordeaux. ’61 Burgundy. ’21 Dom [Perignon]. 1927 Chateau d’Yquem. Those are white whales. Something really old like that. And I wish that First Growth Bordeaux weren’t so expensive. It’s just insane.