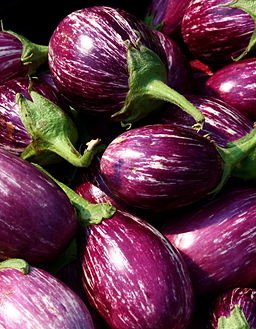 A few weeks ago I happened upon a startling discovery: Some of my favorite area farmers do not care for eggplant. They grow it; they sell it. Apparently, though, they don’t eat it.

How could this be? Eggplant is so lovable, especially from a farmer’s perspective. It’s insanely easy to grow in the South, as it loves heat and humidity. It’s abundant right now, when most other summer produce is fading, and it keeps producing right up until frost. It’s a beautiful plant, too. The fruit comes in colors ranging from pure white to a deep purple, sizes ranging from small eggs (hence the name) to large globes and elongated pods, and skin patterns ranging from solid to speckled to striped.

Despite all this charm, eggplant is an interloper on many Southern tables. Where it has crept into American cuisine, it has often come through Mediterranean and Asian influences—appearing in dishes as diverse as its appearance. Eggplant has an affinity for garlic, herbs and olive oil, but it also gets along well with its fellow nightshades: tomatoes, potatoes and peppers. It takes on the stronger flavors around it and loves to soak up oil, adding substance and depth.

Then again, eggplant has its challenges, too. For instance, it’s rarely served uncooked (some think raw eggplant is poisonous, but you’d actually have to eat a LOT of it to suffer any ill effects). The seeds and liquid in the flesh of the fruit can be bitter. Some dislike the texture of the cooked skin; others don’t care for the soft texture of the cooked flesh.

Come to think of it, perhaps eggplant is an acquired taste. But it’s a taste that’s well worth developing. You probably already tolerate eggplant parmesan—because pretty much anything is delicious when it’s breaded, fried, and smothered in tomato sauce and cheese. A good next step is baba ganoush, a dip made by grilling or roasting an eggplant until it’s collapsed on itself, then pureeing the interior flesh with garlic, lemon juice, tahini, olive oil, and salt. It’s easy and tasty.

Here are a few more tips and suggestions, from folks who ought to know:
•    Miller Union executive chef/owner Steven Satterfield always sweats eggplant with salt before cooking to draw out the bitter liquid and to break down the tissue so it doesn’t turn out rubbery. After slicing or dicing the eggplant, he arranges it in a single layer on paper-towel-lined baking sheets and sprinkles it generously with kosher salt. After 20 minutes, he blots it with paper towel to remove the liquid and excess salt.
•    Burge Organic Farm’s Cory Mosser likes it salted and “cooked” in acid, almost like a ceviche. Here’s the technique he uses: Peel and slice eggplant about ¼-inch thick; cut slices into 2-inch pieces. Toss with salt and allow to drain at least 12 hours, then squeeze out any remaining liquid. Toss drained eggplant with enough red wine vinegar to coat; let marinade for 1 hour. Then pack in jars with fresh basil leaves, sliced garlic and crushed red pepper. Cover with olive oil and store in refrigerator at least 1 week before eating. It will keep for several months.
•    Amanda Williams, a culinary arts instructor from Maxwell High School, demonstrated a simple eggplant sandwich this summer at Snellville Farmers Market: Peel eggplant and cut into ¼-inch slices. Rubs olive oil on both sides; grill on a panini grill.  Place grilled eggplant on bread with a slice of mozzarella cheese and a piece of fresh basil. Grill until bread is toasted and cheese is melted. (You could use the same technique on a old-time grill iron or in a frying pan.)
•    One part of the South that has embraced eggplant is Louisiana, especially in Cajun cuisine. Here eggplant appears stuffed as a main course, in casseroles and stews, and in rice dishes known as dressings. It even appears in the occasional sweet dish, such as in this recipe from Cumming farmer Paula Guilbeau for Eggplant Fritters.

Eggplant is one of the few plants that even I can grow, so this time of year we eat a lot of it. I make baba ganoush and a slight variation involving roasted red peppers; eggplant parmesan and eggplant lasagna; an Asian-style stir-fry with garlic and tofu; and one of my all-time favorite Indian dishes, Baingan Bharta. Lately, due to a bounty of potatoes and peppers, we’ve also been sautéing it in a sort of improvised nightshade stir-fry. Because that sounds kind of scary, let’s just call it Eggplant Hash.

I can’t blame my farmer friends for disliking eggplant. I guess it takes some getting used to. But I hope they, and other eggplant doubters, will check out some of these suggestions and give eggplant another try.