Home Local Foods Is Atlanta ready for an all-blood dinner? 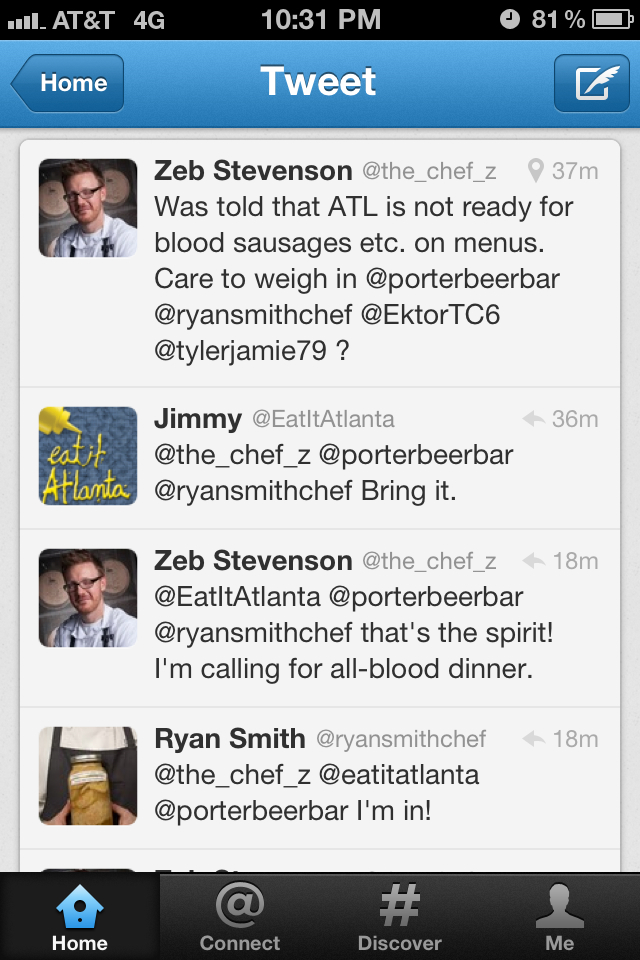 Last night on Twitter, chef Zeb Stevenson posed a quick question, “Was told that ATL is not ready for blood sausages etc. on menus. Care to weigh in?” The response was almost uniformly positive – Ryan Smith of Empire State South saying that he sells it all the time, people clamoring for an all-blood dinner, donuts with blood ganache, and you get the idea. Most of the conversation is included below.

What got me thinking, though, was the response from Besha Rodell, the former Creative Loafing critic who recently relocated to Los Angeles to fill Jonathan Gold’s position at LA Weekly. “If anyone starts any serious food conversation with “Atlanta isn’t ready for…” they’re idiots,” she said. I have a feeling that she’s right. I constantly hear complaints from people who feel like the food scene in Atlanta is too safe, too middlebrow.

On the other hand, it seems like Atlantans are very happy to support an always-growing number of burger joints and steakhouses. When the money seems to be in cheeseburgers and ribeyes, perhaps investors get wary of putting their money behind more unusual or innovative dishes?

For those of us who’d like to see a little more risk-taking and innovation, though, we might have an all-dinner courtesy of Zeb Stevenson, Ryan Smith, and Kelly English on the way.

Review: Redbird stands out among the Westside’s high-end restaurants