Home Uncategorized Is culinary school worth it? No, says Jarrett Stieber

13 Questions is a weekly series where we ask chefs 13 questions to get to know them outside of the kitchen. Jarrett Stieber runs the pop-up Eat Me Speak Me out of Candler Park’s Gato.

What’s the most chaotic thing about not having an official restaurant?
Logistics have been a pain in the ass. Three nights of service takes me seven days a week: accounting, ordering and sourcing, I have to be available for farmers when they show up to the restaurant, all the prep, the menu planning, social media, secretarial duties.

When you aren’t cooking, how do you spend your free time?
I play recreation league ice hockey when I can. I go to places where I can drink cocktails, like the Righteous Room because it’s dog friendly, open late after work, and cheap. I also like places where I know friends, like Kimball House and Bocado.

What’s the one thing you wish you knew how to cook?
Lechon, the suckling pig that they do in Asian countries

What’s the last TV show you binged?
I just finished Wayward Pines. We’ve been watching Mr. Robot. I like The Strain as well.

What was the best advice you got when you apprenticed and worked for Alon’s as a teenager?
I was working there for my entire junior year of high school. Alon taught me a lot about reputations. You kind of live or die by your reputation, your references, not burning bridges.

Your food is always so artfully plated. Has that always been a focus of yours?
We have quirky little nicknames for sauce work. “The universe” is a bunch of concentric circles around the rim, and sometimes we’ll put shooting stars or planets on it. “The skid marks” is offset spatula plating. For “the Ray Charles,” we squirt sauce everywhere, kind of abstract. For that dots trend, we do satirically tiny dots, so I tell my cook to “put acne on plate.” We want our customers to feel loose when they’re in there; we’re just playing with food for a living.

You play in a band. What’s your instrument?
We don’t play very often because of my packed schedule. I play guitar mostly, and I do most of the writing, but the bassist also writes, too. We’re called the The Easy Beat, a reference to Dr. Dog’s first album.

As someone who left college to attend culinary school, do you think it’s worth it? No, I don’t think it’s worth it. Just go out and get a job in the restaurant industry. Everyone is going to hire a dishwasher or an apprentice. As long as you aren’t an arrogant jerk, they’ll probably hire you.

What would be your dream pop-up location?
The Consul Energy Center, where the Pittsburgh Penguins play, or Dr. Dog’s RV on the road

Your adorable Great Pyrenees, Fernando, stars on your Instagram. Any funny stories about having such a big dog in a small apartment?
We just need a bigger couch. He spends the vast majority of his day sleeping. There aren’t any pictures on Instagram of me, so he gets recognized more than me. People see me walking him and say, “You must be Eat Me Speak Me.”

You’re always writing clever, pun-driven menus, but do you write outside of work?
I write creative short stories and song lyrics. My writing style is more a product of Ray Bradbury—and Hemingway but a little less brutish. I like his way of stating things assertively.

What’s one food you can’t stand?
I don’t like oats, especially in cookies. If someone gives me an oatmeal raisin cookie, I’ll eat it to be polite, but it makes me uncomfortable because it has a cuticle skin texture.

Where would you like to travel next?
My fiancée [whom he met when they both worked at Empire State South] and I are talking about planning a honeymoon to Montreal and rural Quebec. For food, Barcelona and Tokyo are my two dream cities. I wanna go somewhere where meat is hanging from the ceiling, and it’s totally natural. 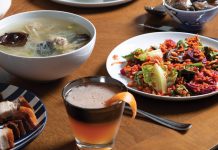