Best known for fine dining spot 4th & Swift, which closed in 2016, restaurateur Jay Swift has accepted a new post as executive chef at the Iberian Pig in Decatur. He takes over from chef Eric Roberts, who is now working at Rumi’s Kitchen. Swift brings 30 years of culinary experience to the Spanish tapas restaurant. Most recently, he opened seafood spot Noble Fin with his son, Jeb Aldrich, in Peachtree Corners, but is no longer associated with the restaurant. (Aldrich, meanwhile, is the now the executive chef at the soon-to-open Tiny Lou’s at the Hotel Clermont.)

“I like this company,” he says of Castellucci Hospitality Group, which owns the Iberian Pig, along with Cooks & Soldiers, Recess, and Double Zero, among others. “I like the restaurant. I like the small plates format. It allows for a lot of fun creativity.”

He says he’ll gradually change the menu, starting with 4 to 5 new items released seasonally. Staples like the bacon-wrapped dates, empanadas, tacos, charcuterie, and cheeses will stay on the menu, while new items—such as scallops with sunchoke puree and roasted cauliflower or lamb chuleton with cous cous, pomegranate, and epizote—are introduced. Other items Swift is considering adding to the menu include tomato bread salad with Cana de Cabra, red onion, cucumber, Jerez, and olive oil; and deviled crab with artichoke bottoms and piquillo sherry hollandaise.

“In many ways, cooking is cooking. I’ve always drawn on different influences,” he says of the change from seafood to tapas. “I’ve studied a lot, read a lot, cooked a lot. It’s not that different with what’s going on in food trends.”

Why did he opt to work for established restaurant rather than opening is his own new restaurant like Noble Fin? “It was time to move on. It’s a crowded market for restaurants,” he explains. He doesn’t deny the possibility of opening another restaurant of his own in the future, but for now, he says he’s happy where he is. As to whether he’ll be involved in the recently announced Buckhead location of the Iberian Pig? “One thing at a time,” he says. 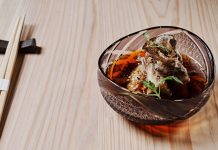