Smoke Ring, a new barbecue joint, is scheduled to open in Castleberry Hill at the end of September. The latest from 101 Concepts (they also operate Cibo e Beve, Food 101, and Meehan’s Public House), this “gastrocue” will be led by Jordan Wakefield, former executive chef at Meehan’s downtown, and his wife Erin. It occupies the space previously home to J.R. Crickets. Smoke Ring will serve traditional barbecue, as well as sliders, small plates, soups, and salads, with sides such as cotija corn on the cob, bacon, and jalapeno cornbread. Below, Wakefield shares details on the restaurant.

Why did you decide to focus on barbecue for your new restaurant?
I’ve been doing barbecue my entire life. I remember being out in the backyard with my family when we were kids. It’s always been a passion of mine. I’ve tried to implement it wherever I’ve been—Meehan’s, Food 101.

Most barbecue places in Georgia have the relaxed atmosphere but stick to basics. There’s not one place where you can get the best brisket, best ribs, best pulled pork, the best Brunswick stew, and the best sides. It’s a goal of mine to pull them all together and have them at my own place.

Why Castleberry Hill?
Castleberry has a really positive vibe. Everybody’s great. The city of Atlanta is really starting to compete with other culinary cities. We’ve put ourselves on the map and down there we have the Ferris wheel, the Falcons, and the Braves. It’s a vibrant atmosphere, and we’re excited to add our particular flavor to it.

What style of barbecue will you serve?
I want to put a new style of barbecue on the map and help create a Georgia brand. Things in the South have come from Florida, New Orleans, Virginia, North Carolina—no one is completely from a certain area. We hold onto certain things passed down from generations.

But what kind of sauce will you use?
We’ll have our own line of four to six sauces: a mustard sauce made from whole grain Guinness mustard, a white barbecue sauce, and an ancho chile red barbecue sauce.

Tell me about the atmosphere.
Most barbecue spots have this kind of burn and churn atmosphere. At Smoke Ring, you can come in for a quick lunch—we have like six or seven sliders on the menu—or a three-course meal with cool snacks and small plates. You can come throw down some beers and shots after a game or have a nice meal with your significant other.

I want to create a place where people come in once or twice week, not once or twice a month. So it’s not going to be pretentious. The floors come from an old cotton mill. The walls are reclaimed woods. There’s off-white tile, a wooden bar and wooden tables. There’s a lot of natural light from the windows. We can fit thirty or forty people on the patio, plus more than a hundred inside.

We’re talking about having live music—potentially a one or two person acoustics. And we’ll play upbeat stuff—southern rock, country, the classics.

I also want to start a garden and a farmers’ market nearby.

How do you envision the bar scene?
My wife will be the bar manager. We’re not having any imported beers—all domestic. We’ll have a nice selection of moonshines and bourbons and even our “cheap” wines are going to be really good reserve wines. While we appreciate places where it takes ten minutes to get a four-ounce drink, it won’t be like that; that’s not where everyone wants to go. 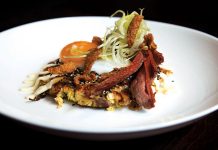 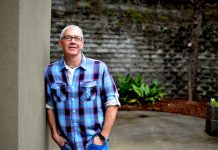