When it comes to chocolate, Valrhona is king. The French brand is used in desserts at our city’s finest restaurants, and recently the company invited nine American pastry chefs, including Sarah Koob of Canoe and Joy Jessup of Kevin Rathbun Steak, to attend a week-long training program at its prestigious academy, Valrhona Ecole du Grand Chocolat. “I’ve done classes there before, but not since the late ‘90s,” Jessup says. “I was excited to do it again. It’s hardcore class training, but it’s really fun.”

Classes ran from morning through evening for three days. Attendees were split into two groups and given recipe books.

“You learn better ways to work with chocolate—temperatures, times, things like that,” Jessup says. “While you’re working, they stop to show you certain things. You never really sit down.”

Since she’s been back, Jessup has tweaked the dessert list at Kevin Rathbun Steak to showcase her new skills. She recently composed a dark milk chocolate bar with chocolate almond streusel, dark chocolate coffee sauce, and almond brittle garnish using her new emulsion techniques. “You can now eat the whole thing, even if you’re full,” she says. “It’s delicious but not heavy or sickening.”

Jessup also revised her smores baked Alaska to have “better mouth feel” and better texture. “I pipe a chocolate sauce into the parfait and put it on a crunchy base, then coat it in marshmallow meringue,” she says. 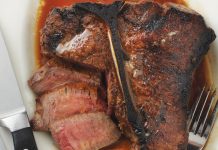