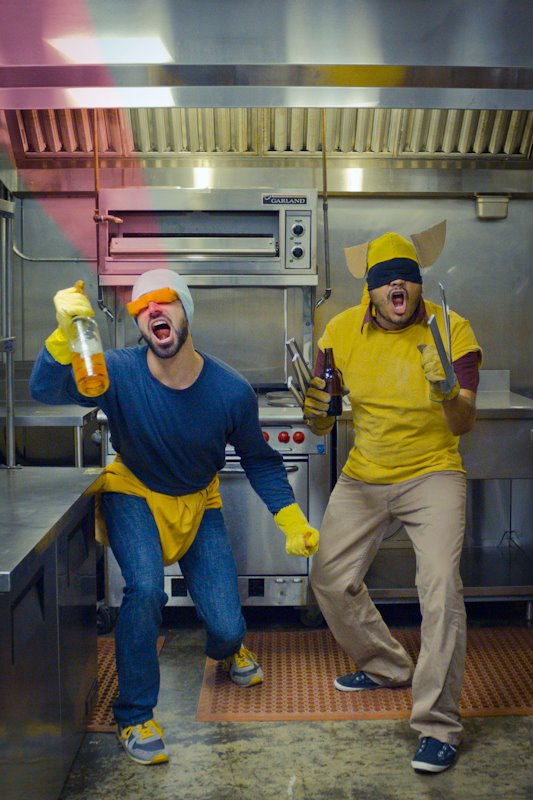 This weekend, Joystick Gamebar opened at 427 Edgewood Avenue, the space formerly occupied by Dynamic Dish. The concept couldn’t be more different than the previous, carefully-locavore tenant: Joystick is offering video games, cocktails and beer, and a menu of over-the-top junk food inspired snack foods. They’ll open Tuesday through Sunday at 5 pm and close at 3 am every night except Sunday.

Mark Nanna, who has worked under Richard Blais at FLIP Burger Boutique and with Hector Santiago at Pura Vida, developed a menu for Joystick that includes “Kool-Aid Pork Steamed Bun,” “Redneck Poutine,” and a savory doughnut. We caught up with Nanna to ask a few questions about the bar and his menu.

Are you drawing on the skills and styles that you were working with at FLIP and Pura Vida? Or is this menu an entirely new direction for you? I’m always learning and yes, in a sense it’s a somewhat new focus (snacks), but I definitely draw from all my past experiences. As a chef I’ve played in lots of sandboxes and I think I can’t help but be influenced by all of them. But more than anything I’m drawing on the experience of being a fat kid, loving bacon and realizing that other people do too.

I see Kool-aid cured pork belly in streamed buns on the menu. For real? Please elaborate. For real. Exactly what it sounds like. The inspiration being the Chinese boneless spare-ribs that are always that weird red color, using cherry kool-aid to get the color, but also as a natural flavor enhancer for the pork. When I was ideating it I was first thinking red food coloring, but then thought why not take it a step further and actually affect the flavor too. I was right, cherry kool-aid goes really great with pork belly!

Are you a big video game guy? What’s your favorite? Yes, I haven’t really had time to play in a while but the era the games at Joystick come from (Galaga, Street Fighter, Ms Pac Man) was awesome; those games basically served as a babysitter for me growing up. That was also the time I started cooking for myself (by “cooking” I mean mean boxed mac and cheese, stovetop stuffing, food color experimentation with rice). But more recently, some of my favorites have included the Tekken franchise, Tomb Raider, Grand Theft Auto, and World of Warcraft to name a few.

Have you thought about pairings? Like, what’s the right drink to go with a vigorous game of Mortal Kombat or the right snack for Ms. Pac Man? I haven’t done much with the drink menu because I didn’t have to. They have a great selection of really good beers, some wines, and Brandon’s put together some really great cocktails. Of the snacks, the caramel popcorn and salt & vinegar fish and chips are like the perfect sit back on the couch with a controller in one hand, bowl of snacks in the other sort of food. They really lend themselves to that era. I like to think also the tempura fried oreos will make one feel like they can conquer otherworldly space invaders. And I guess they match the whole black and white theme…

What’s the cheat code for an awesome evening? Can I just tell the bartender “Up Up, Down Down, Left Right, Left Right, B A, start” and they’ll bring out unlimited drinks? Hmmm… here’s a good combination of buttons to push for a good time – Start with the housemade chai soda. Followed by the kool-aid pork steamed bun and finish it off with the oreos and then crush the signature 4th and Sand and try to keep it together for a round of Galaga.