Home Restaurants Julia LeRoy chats about her new fried chicken spot
ATL Food Chatter: May 31, 2011
(To receive the Chatter and other culinary tidbits directly in your inbox, sign up for our weekly dining newsletter)
LeRoy’s Fried Chicken certainly sounds like a place that will put some South in your mouth. Julia LeRoy is opening her Westside fried chicken stand with Clay Harper and Mike Nelson, the owners of the Fellini’s Pizza and La Fonda Latina restaurants. Their first collaboration was a gourmet frozen yogurt concept called Three on The Tree, where LeRoy served as the “guest confectioner.” Leroy has been looking to open her own restaurant since she left the Bookhouse Pub last year. Since then, the Seeger’s alum has worked in several local spots, including Shaun’s and Woodfire Grill. But she enjoyed consulting with the Fellini’s team that she decided to partner with them on LeRoy’s.

Q: Can you describe the idea behind LeRoy’s Fried Chicken?
JL: A take-away-only fried chicken stand that focuses on providing an option for Atlantans who want their delicious fried chicken but would appreciate a better bird. We’re only using all natural local chickens [from Springer Mountain Farms]?to supply the stand. We’ll fry the birds in lard, the good old-fashioned way. You’d be shocked if you knew how much worse fryer oil is for you than lard!

Q: What went into the decision to go with a carryout concept rather than?open a sit down restaurant?
JL: I wanted to cook fried chicken, and it seems like everyone likes to get it to-go. The take-out model also allowed us to have a lot more fun designing the place. I love the way it’s looking. I think it’s going to be a really fun space, and I’m so glad I don’t have to deal with tables and?chairs right now.

Q: What else will you serve besides fried chicken?
JL: This is subject to change, but: coleslaw, mac ‘n’ cheese, collards, biscuits, and ?hand-cut fries as well as fried chicken hearts and chicken livers.

Q: Where are you opening and when?
JL: We are located on the corner of 11th Street and Howell Mill Road, right?next to La Fonda Latina. As far as a date, we’ve been saying we’re opening in?three weeks for about the last three weeks. All I can say is that it’s moving very quickly.

NEWS AND NOTES:
Congrats to Creative Loafing’s Besha Rodell, who has been named a finalist for the 2011 Association of Food Journalist Awards in the Best Food Essay category.

Buckhead. The Atlanta Business Chronicle was the first to report that Atlanta radio host Frank Ski will open Frank Ski’s this June in the former Thirsty Dog Tavern space at 2110 Peachtree Road. Ski says that the retso will offer “sophisticated Southern food,” live music and a Sunday Jazz brunch.

Inman Park. Rathbun’s will be celebrating its seventh anniversary on June 5 with its annual BBQ and Blues Party.
http://www.kevinrathbun.com/restaurants.html

Little 5 Points. The Wrecking Bar folks are planning their grand opening for Sunday, June 19, which also happens to be Father’s Day, according to their web page.

Marietta. Marc Taft, previously general manager at Pacci, will open a new restaurant called Chicken and the Egg at 800 Whitlock Avenue in Marietta in August. The press release describes the place as a “neighborhood gathering spot that will serve sophisticated yet approachable modern farmstead fare.” Seiber Design, Inc. is designing the modern farmhouse look.

Roswell. Look for Slate Table and Tap, featuring an American traditional menu of burgers and sandwiches, to open at 1132 Canton Street soon. Todd Hogan of nearby Indigo will be the top toque.

Virginia Highland. Urban Daddy reports that the team behind Goin’ Coastal has created the Mobile Pig Roast, a onsite whole hog roasting service available to feed 20 to 1,000 people. of the pork loving friends.

Westside. Bill Addison reported on Twitter last week that Giovanni Di Palma’s Antico Pizza Napoleta will soon begin expanding into other markets (including New York and Los Angeles as well as Asia and South America), but that the original will be the sole location in Atlanta. Di Palma is also renovating the property across from the pizzeria into what he calls a “piazza.”

Question of the Week: Name the American living in Paris who was a featured speaker at the recent BlogHer food conference.

PS. The answer to last week’s QOTW—Name the sister of a visiting Atlanta Food & Wine Festival guest chef who once owned a metro-area restaurant—was Alena Pyles, Steven Pyles sister, who opened SoHo in Vinings back in 1997. 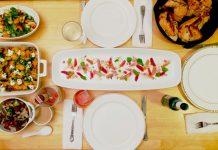 What did Atlanta chefs cook at home during Snowpocalypse?