Mali Hu, founder of the One Sushi Plus in Brookhaven, is opening a modern Japanese steakhouse called Katana in late August. Located across from Lenox Mall at 3345 Lenox Road, Katana aims to be a modern take on the hibachi steakhouse with a renewed focus on the food, according to Hu.

“All of the hibachi steakhouses people know serve the same food, use the same sauce, and [put on] the same show,” she says. “We’re about quality. You won’t see the chef throwing shrimp everywhere.”

Instead of hibachi chefs cooking everyone’s order together using the same additives (salt, pepper, soy sauce, and margarine), they will prepare dishes separately. So if you order steak and your friend orders sea bass, one may be paired with a truffle sauce and the other with a jalapeno dressing. The “show” aspect of hibachi will still be present; it’s just not the most important aspect, Hu explains.

Jason Liang, executive chef at One Sushi Plus, is designing the menu and will oversee Katana, as well as the One.

As for libations, a full bar will offer boutique wines, high-end Japanese beer and shochu, whiskey, and sake cocktails. The restaurant is looking into serving its own brand of sake.

Hu says that the restaurant will be modern with a lot of concrete and minimal color. “You’ll get a calm, zen feeling when you walk inside,” she says. Guests will even have the option to enjoy a drink outside in the Japanese garden.

“We want to create a whole new experience, a new adventure,” she says. 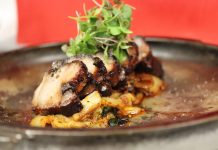