Home Uncategorized King of Pops is creating a “dessert alley” Popsicle-prenuers Steven and Nick Carse are working on building a “dessert alley” in Inman Park or Old 4th Ward that will sell sweet treats and coffee. The men behind King of Pops say that they haven’t signed any leases (they’re working on it), but they have been busy testing recipes. They hope to open in April 2015.

“We just felt like the time was right. We’ve certainly established ourselves as a street brand for the people, but there’s sometimes confusion when people don’t know where we’re going to operate,” Steven explains. “We’re excited to try some new things. We’ve been doing pops for five years.”

In typical King of Pops style, they won’t be hiring any pastry chefs, but instead are turning to their own talents. Nick has been baking cookies since kindergarten, and former employee Neil Ringer “fancies himself a great pie maker,” Steven says.

“We won’t put [a product] out there until we’re happy with it,” he adds.

In the meantime, the King of Pops team is working on their farm, growing strawberries and herbs for next year’s pops. They hope to create an event space there in the next two years and host crop mobs and demonstrations. 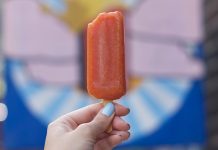