Legacy Restaurant Partners—the company behind Stats, Max’s Coal Oven Pizzeria, and Der Biergarten, among others—is working on plans for a barbecue joint, which would be located Downtown (on the same strip of Marietta Street as the aforementioned restaurants). Legacy is aiming for it to open in the third quarter of this year.

According to Legacy managing partner Brian Bullock, the restaurant will be about the size of Max’s but with a large smoker in its center. He said the type of barbecue it will serve remains under debate, but the decision has come down to either beefy Texas-style or pork, rib-centric Memphis-style. Whether the restaurant will be quick-serve or sit-down is still under discussion as well.

Bullock says the space will likely have an industrial feel, with exposed brick. It is tentatively being called the Magical Beast. 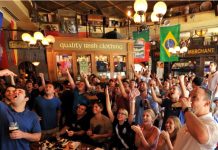