ATL Food Chatter: October 26, 2009
(To receive the Chatter and other culinary tidbits directly in your inbox, sign up for our weekly dining newsletter)

“Keeping up with the times” is how Riccardo Ullio described his decision to convert his former Spanish-themed Cuerno space into Lupe, a ninety-seat Midtown Mexican taqueria, at a friends and family event last week. He explained how economic circumstances prompted the move from “a destination restaurant to a neighborhood place.”

Lupe, named after Our Lady of Guadalupe, “the symbol of Mexican identity, history and culture,” according to Ullio, offers a menu that is smaller and less expensive than its predecessor and is geared more to the growing Midtown neighborhood where it is located.

What I noticed first upon entering the reconfigured-but-still-sexy space was that the signature Cuerno bull statue was gone. Ullio said that it is in an art gallery, waiting to be auctioned. The rest of the decor has not changed too dramatically: There is a mural of Guadalupe, red cowhide banquettes, colonial chandeliers decked with handcrafted Mayan-style pendants, and a polished stone bar.

The second thing I noticed was the new menu is relatively compact. The price points are lower than Rosa Mexicano but higher than Taqueria Del Sol. Expect an assortment of tacos priced at 3 for $9 (no mix-n-match options, which irked Cliff Bostock), quesadillas from $7 to $12 and platos or small plates from $13 to $22. The highest price item was a $22 whole roasted red snapper. The beverage menu places an emphasis on tequilas (there are fifty-three).

Lupe has promise: The bar looks as if it could be a destination spot like its next-door sibling, Beleza, and with time, the kinks can be worked out with some of the menu items that we sampled. The location, at 8th and Juniper, is still the biggest unknown in the equation: If the community embraces Lupe like Inman Park has embraced Fritti, then it could be a noteworthy addition to Atlanta’s dining scene.

Buckhead. A Meal to Remember, a benefit for the meals on wheels for senior citizens, will be held Friday, November 6th at the St. Regis Hotel. For details, visit www.scsatl.org.

The Atlanta Business Chronicle is reporting that Saskatoon—a Greenville, S.C. based restaurant featuring wild game, steaks and seafood—has signed a lease to operate a 6,800 square-foot oupost at 366 Pharr Road.

The Hard Rock Cafe has replaced the iconic Cadillac perched on its roof with a thirty-foot guitar.

Midtown. The Cook’s Warehouse is slated to open its new expanded location inside Ansley Mall November 13.

Smyrna. The Vinings Grill has closed.

Vinings. The Burger Club is slated to open November 4 for lunch at 11:30 p.m.

Question of the Week: What intown coffee shop has partnered with an organic farm to offer their customers the opportunity to purchase farm fresh organic produce and free range eggs?

P.S.  The answer to last week’s QOTW—who was the opening chef at the Dining Room at the Ritz Carlton Buckhead?—is Chef Jean-Pierre Maharibatcha. The French Vietnamese chef is now in Hawaii. 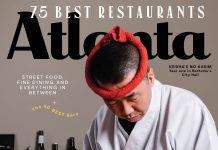 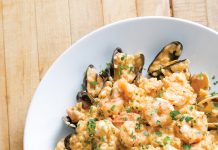 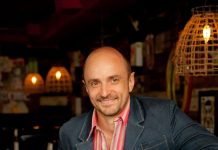