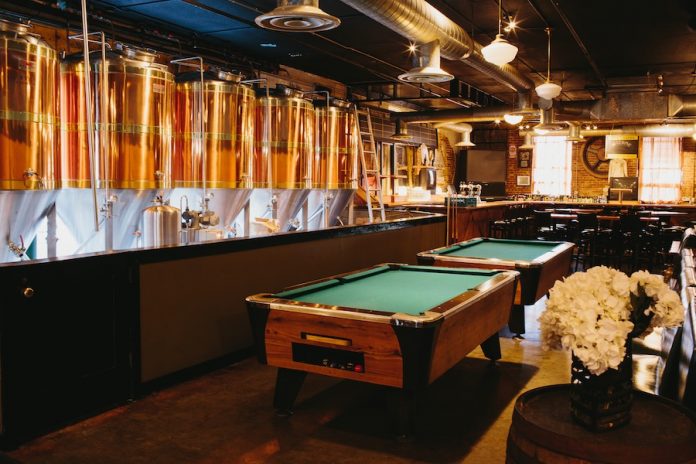 John “JR” Roberts, brew master and managing partner of Max Lager’s, has a vision for his space. He begins with the most important thing: installing more taps.

“We’re putting in twenty taps here with a bar on the opposite side,” Roberts, says to me, pointing out sections in the upstairs dining area where construction will soon start.

Max Lager’s has held its own for 17 years in Downtown Atlanta, and Roberts says its high time for a facelift. Renovations will start with a brand new roof, adding in wide French double doors upstairs to brighten up the private dining room, and the addition of a biergarten on the outdoor deck. The new 20-tap bar upstairs will be open every day, Roberts says, pouring house beers and an assortment of other craft offerings.

Even the kitchen, known for its smoked wings and brick oven pizzas, will see some hammer action that will increase space and mobility. Construction is slated to begin this fall and shouldn’t impact customers, Roberts says, fingers crossed. Which means nothing will get in the way of a visit, where there’s plenty of beer to enjoy on tap:

The hops came out to play on this one and, they have a blast (those exclamation points are there for a reason). The brewpub describes throwing “copious amounts” of Citra, Amarillo, El Dorado, Ahtanum, Azacca, Centennial and Cascade hops in the mix. Dry hopped twice (hey, you can never be too careful), warnings of hop head explosions are surely exaggerated. But you might need a friend to fetch you some vapors. (ABV 8.1%)

The geeks almost tapped out this Belgian-style tripel during Dragon Con, and the pub is still keeping up with demand for its golden hued beauty. Fruity, spicy, with just the right amount of carbonation, it’s brewed with Belgian candi sugar and rum-soaked spirals that round out a complex beer. (ABV 11.5%)

Thanks to Australian Galaxy hops (grassy, passion fruit) and Medusa hops (lots of guava and melon), this India Black Ale has an earthy base with mild notes of toffee and dark chocolate. Brewed with malt pecan wood smoked in-house, the beer takes on a smoky flavor that adds to its depth and character. (ABV 8%)

And coming to a retail shelf near you, the Atomic Frog double India Pale Lager collaboration with Red Brick Brewing is scheduled for bottling in November for a December/January release. Tropical with a citrusy zing, it has a lager base that was hopped like an IPA (ABV 8%). Look for it in 22-ounce bombers this winter.