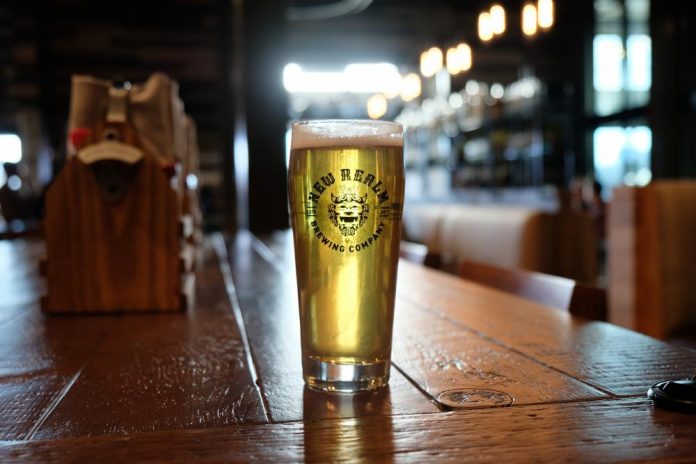 There’s no doubt Atlanta’s craft beer scene is a fast-growing one. From Orpheus to Gate City to Scofflaw, new breweries have popped up all over the metro area during the last few years. One thing Atlanta breweries generally don’t have, however, is a full-service restaurant. New Realm Brewing Company is looking to change that, with the opening of its 20,000-square-foot restaurant and brewery along the Atlanta BeltLine’s Eastside Trail.

Located next to TWO Urban Licks, New Realm’s restaurant is open to guests of all ages. Chef Julio Delgado, formerly of JP Atlanta, designed the menu, incorporating items that pair well with beer, from soups and sandwiches to burgers and pizza. Official beer and food pairings will be available in the future.

Food is available throughout the property’s 400 seats on the patio, rooftop beer garden, dining room, private dining room, and interior bar. However, the rooftop and patios will serve a more condensed menu.

Brewmaster Mitch Steele is leading the four-vessel brewhouse and plans to produce 20,000 barrels at a time. On the premises, eight beers will be available on tap and four from serving tanks located directly behind the bar. Other taps will rotate experimental varieties. Currently, the brewery’s four “mainstay” beers include an IPA, a pilsner, a pale ale, and an imperial IPA.

Beginning in February, tours will be offered. They’ll cost $8 per person and include a souvenir tasting glass and 4-ounce pours of various beers.

Below, Delgado shares his inspirations, favorite menu items and more.

Do you think of New Realm more as of a restaurant or a brewery?
We are both. We’ve put together a great culinary team that is serving great local fare, and at the same time, we are a great place to come sample from a wide range of beer styles.

What’s your inspiration for the food?
[We aim to] utilize fresh, local ingredients and Southern flavors and pair them perfectly with a pint.

What are some menu items that you’re most excited about?
I’m proud of the menu as a whole, but the Radegast Burger, which is made with house-ground prime rib, white cheddar, house-made sour pickles, special sauce, and served on a Brioche bun, stands out. [Radegast is also the name of the brewery’s specialty triple IPA, which launches this weekend.] Also the wood-fired pizzas, like the Meat Head, which has meatballs, pepperoni, ham, and sausage.

How do you ensure the food pairs well with the beer?
I pulled inspiration from Mitch’s beers to create an approachable menu that’s rooted in tradition. Mitch and I work together to make sure we are using the beers and other brewery ingredients in our food.

What’s your favorite New Realm beer?
Our Euphonia Pilsner. It is a German-style Pilsner that is hop-bursted with noble and new-school German varieties.