In the last two weeks, a lot has happened at Watershed on Peachtree. Chef Matt Marcus (formerly of Woodfire Grill and Portofino) purchased the iconic restaurant from Emily Saliers (the Indigo Girls) and Ross Jones, ousting executive chef Zeb Stevenson in the process. (Stevenson and Jones are now working on a new, vegetable-forward restaurant.) Marcus proceeded to close Watershed for a week of renovations—a coat of paint here, a new menu there—and will reopen it on April 17.

Marcus has created a “new South” menu with a chef’s tasting menu in the works. The new menu includes Georgia jellyfish carbonara with cured egg and ham bits; mopped eye of rib with root vegetable truffade, mushroom and onion confit; and baked Atlanta, a play on baked Alaska made with banana pudding. There’s also a $350 plate of house-cut French fries with sea salt, served with a bottle Krug Brut Rosé (which retails between $250 and $300).

We spoke with Marcus to learn why he decided to take the restaurant in this new direction.

Why did you decide to purchase Watershed?
I tried to open two restaurants in Chamblee and basically got screwed out of them by business partners. Both times I got the restaurant built and ready to rock, and they decided to go with someone cheaper using my recipes. Without that happening, I wouldn’t be at Watershed today.

Why Watershed as opposed to another restaurant?
I was born and raised here. I’m a third generation chef. I’ve paid attention to the food scene in Atlanta since I was 5 years old. Watershed has always been on my radar. [Southern culinary icon] Edna Lewis was my inspiration. I followed Scott Peacock [the chef at the original Watershed in Decatur] for years. I always liked how [the owners of Watershed] were willing to evolve the menu. They weren’t too afraid of change. The ability for evolution and progression was already put into the building and the concept. My influence is very Southern and heavily French. Watershed caters to the style of food that I cook. Being the sole owner allows me to elevate this cuisine.

Why close for a week and completely revamp the menus?
I didn’t want any confusion between Zeb and I. Zeb did such a fantastic job here. I didn’t want it to seem like I was taking his dishes and running with them. This allows me to put my stamp on the restaurant. There’s no doubt that the food, chef, and product has changed.

Are you keeping any of the original dishes?
I’m keeping two and doing a play on one. I’m taking the corn sticks—cornbread done in cornstick pans—and elevating it and serving it with foie gras butter, cotton honey, and berry compote. The hot milk cake is everybody’s favorite dessert. I’m keeping the fried chicken but doing it in cast iron skillet, just ten orders for dinner, first come first serve, Tuesday through Thursday. I’ll serve Cajun caviar with the chicken.

Tell me about the tasting menu.
It’ll launch two weeks after the a la carte menu. [It’ll be billed as] a seven-course tasting menu at $100, but it’s really more like 11-12 courses with all the snacks. It’s going to be a walk through my life. My life has always been filled with snacks that are more elevated than other people’s. For example, the third course is foie gras “Milk Duds” (malted foie gras made into truffles), and there’s St. Germain “Dippin’ Dots” finished with Meyer lemon [that is shaped like a LEGO brick].

What’s your inspiration for the menus?
I worked for Parlor Market chef Craig Noone, who passed away about eight years ago. He was one of the first to use appropriate sourcing and offer an articulate menu with influences from people who worked in the fields. It’s about bringing the open-mindedness of all the cultures around us. The South doesn’t just mean fried chicken.

Also, Edna [Lewis] and Scott [Peacock] and my history in Atlanta. That happens more on the technique side. There’s a lot of soul that’s being put into the dishes way before we cook them. Our stocks and sauces are built on flavor. We start with what’s in the pot first.

My life is the inspiration. There are fun and whimsical things all over the menu. Everything is flavor-forward and a little playful. I’m trying to deliver beautiful art and a sense of value.

What does the new beverage program look like?
There’s a new, by-the-glass wine list. We have about 40 by the bottle and 20 by the glass. The rosé program is expanding. The spirits will change—we’re trying to bring in recognizable labels that are approachable, comfortable—and will grow the cocktail list. Beer will be all cans, mostly local with fun and whimsical stuff thrown in. Expect a lot of Monday Night Brewing, Creature Comforts, and Orpheus.

Take a look at the menu below (tap to enlarge) 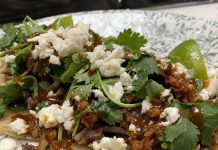