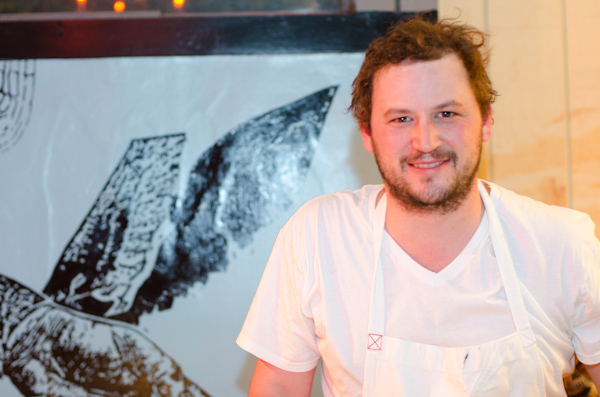 “I just bought a one-way ticket to Ho Chi Minh City; I leave in January,” Angus Brown told me on the phone yesterday. The chef of late-night East Atlanta sensation Octopus Bar (a place I very much like) says he’s taking advantage of some learning opportunities in Asia to hone his skills before he returns to Atlanta in August of 2013. He’ll be back to Octopus Bar but also has his sights set on opening his own restaurant.

Nhan Lee, owner of Vietnamese pho joint So Ba where Octopus Bar pops up from 10: 30 p.m. to roughly 2:30 a.m. six nights/mornings a week, is setting up Brown with family in Vietnam who owns restaurants. “Nhan is a great teacher whose wealth of Asian cuisine seems endless. He was a huge influence for my move,” says Brown. He also plans to stage in Japan during his months away.

What does this mean for Octopus Bar in the meantime? Lee and Brown have agreed it will continue in Brown’s absence, and Brown is busy recruiting a chef—probably from another city—to fill in while he’s away. Before he leaves, Brown says he also plans to headline at BATON Supper Club and will hold at dinner at Love Is Love Farm in late October.

Next up from the owner of Octopus Bar and 8Arm: Pollo Supremo near EAV