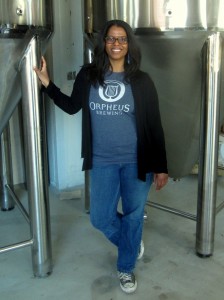 Barely three steps inside The Book House Pub one Tuesday evening, and Rebecca Royster is already proving herself wrong. Known by many as the beloved bartender from The Porter Beer Bar, Royster has recently moved full-time into her new sales rep position for Orpheus Brewing. She had suggested Book House thinking it would be easier to talk for an interview; less interruptions from people she’d love to talk to. Not today. But after chatting with her greeter for a few, we finally sat down at the bar.

Orpheus Brewing is easily one of Atlanta’s most anticipated new breweries, set to open next their taproom overlooking Piedmont Park next weekend. The founders credit The Porter Beer Bar for helping bring their idea to life, so it’s no surprise that the latest member of the Orpheus family is Royster, a familiar face to anyone who frequented The Porter over the past five-and-a-half years.

Royster will develop relationships with accounts and help put new beers on taps throughout the city. “I feel fortunate to be on the ground level,” Royster said.

How did Orpheus convince you to leave The Porter? We go back a ways. I’ve known Jason Pellett [Orpheus’ brewmaster] since The Porter opened. About four years ago he got back into home brewing, and he brewed a beer for my thirtieth birthday. By then he was already calling it Orpheus. We were chatting when the brewery was just getting started and he said he thought I’d be a good sales person.

Was it an easy decision? When you’re friends with somebody you don’t want to jeopardize that. I just wanted to be there to support his brand. But he asked me if I’d be interested. I knew I didn’t want to leave The Porter to go to another bar, so this seemed like a step in the right direction.

How were you introduced to craft beer? I got into beer accidentally. My first beer, I was watching football with my boyfriend at the time, and I felt stupid having a cocktail. Then I saw that it was kind of a woman thing, where people were always trying to serve me cocktails. I thought, “Well, wait, maybe I want a beer.” So I sought out trying different beers.

You became a beer feminist. I was! I used to go to Taco Mac in Decatur with a good friend, we’d go two to three times per week. I got connected with The Porter via a friend who knew Molly [Gunn, co-owner of The Porter] from The Flying Biscuit.

What do you like about your new job? I like being on this side of the bar now. I like that I get to go out and frequent bars and have similar kinds of interactions, but I don’t really have to call it work in the same sense.

Where will Orpheus be available? We’re starting with just 30-35 accounts in Atlanta, and after that we’ll probably try to break into Athens and Savannah. Then hopefully Charleston. I love Charleston.

Any accounts you can share right now? I can say we’ll be at The Porter and Brick Store Pub.

What styles are you starting with? Serpent Bite, a dry-hopped sour mashed saison; Atalanta, a sour plum saison, and Transmigration of Souls, a double IPA.

That Atalanta is a thing of beauty. It’s awesome.

What about upcoming events at the brewery? Can’t wait to see that space. Our taproom will open May 24, Memorial Day Weekend. It’ll be awesome, we’re right on Piedmont Park, the jazz festival will be going on. The following week, Wednesday, May 28, we’re launching at The Porter. We’re having a big party, we’ll be there all day.

Nice. So will this fête be Orpheus-themed, with tea leaf readings and so on? Ha! I don’t know about that. There’ll probably be some t-shirts. Tap handle stickers. I don’t know how far we’ll go into the costuming.