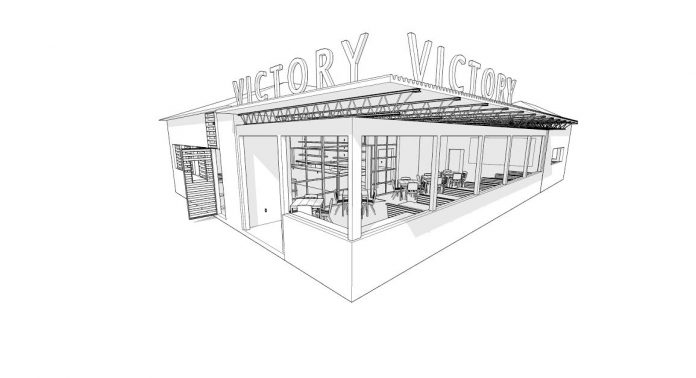 Ian Jones, proprietor of Victory Sandwich Bar and Paper Plane, is frustrated. Originally, he had a May opening in mind for Victory Sandwich Bar’s new Inman Park location (913 Bernina Avenue, the space formerly home to Park’s Edge). Then he figured July. Now, due to a seemingly endless series of meetings and reviews with the city permitting department, it’s looking more like August or September, he says.

“We’re just mired down in bureaucratic coverage,” he says. “We’re ready to go whenever the city’s ready to let us.”

Jones says he’s so discouraged by the red tape that he’s reluctant to say much about a new concept his team have in the works on the Westside. Located in the White Provisions District, it’ll “be more bar scene than restaurant scene, and have some of the cocktail aesthetic on a level between Victory and Paper Plane,” he says.

He’s staying mum on the rest for now, but did take the time to share some key facts about the new Victory Inman Park:

The look
• The space has been completely gutted to focus on a large patio, a ten-to-twelve-seat bar, and a game room with a Ping-Pong table.
• Smaller than the original Victory Sandwich Bar, which closed last summer to make room for a mixed-use development, the new space will seat about seventy-five guests.
• The design will be similar to the Decatur location and feature reclaimed wood from the original restaurant.

The food
• Like at all of the Victory Brands restaurants, Victory Inman Park’s kitchen will be led by Josh Sample and Melissa Allen. No chef de cuisine will be named.
• The menu will be similar to the Decatur location but with more grill specials.
• Jones hopes to attract a big brunch scene on Sundays with everything from breakfast tacos and huevos rancheros to waffles and possibly shrimp and grits—plus drink specials.

The drinks
• Shanna Mayo, who recently announced her resignation from Leon’s Full Service, will be behind the bar, working with Paul Calvert on the beverage list.
• Expect the signature slushies and tiki drinks, plus cocktails on tap.
• Jones says his team is working on a collaboration with a local brewery to create a Victory beer.

The extras
• The Victory team is developing a picnic program so guests can take their food to-go in a basket and enjoy it in the nearby park, complete with a picnic blanket and all.
• Once Victory Inman Park is up and running, Jones says he may plan events such as a bike ride between the Inman Park and the Decatur location, or a field day in the park.