Beginning at 3 p.m., pie lovers around the city and beyond will be able to publically show their affection for the traditional treat by donating to Pie Shop’s Kickstarter campaign.

Though the space does have a communal table and some chairs, Bledsoe says the ambiance isn’t right for much dine-in traffic—“People are basically in our kitchen!”—and the majority of Pie Shop’s customers order their goodies to go.

The thirty-day Kickstarter campaign aims to solve that by raising funds for a second Pie Shop location, this one focused on creating a comfortable space for the lunch and dessert crowds.

“The idea behind the second location is that it would be the best of both worlds—have a nice atmosphere and street visibility,” she says. “We want to have pedestrian traffic so people can come in and enjoy a slice and a cup of coffee.”

She’s looking into spaces in Virginia-Highland, Inman Park, and Decatur. And while the Krog Street Market and Ponce City Market are not in the running this time around, Bledsoe’s not ruling out opening a market location later. This location, however, is targeted at opening in November. 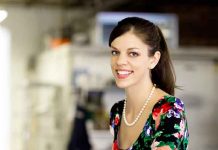