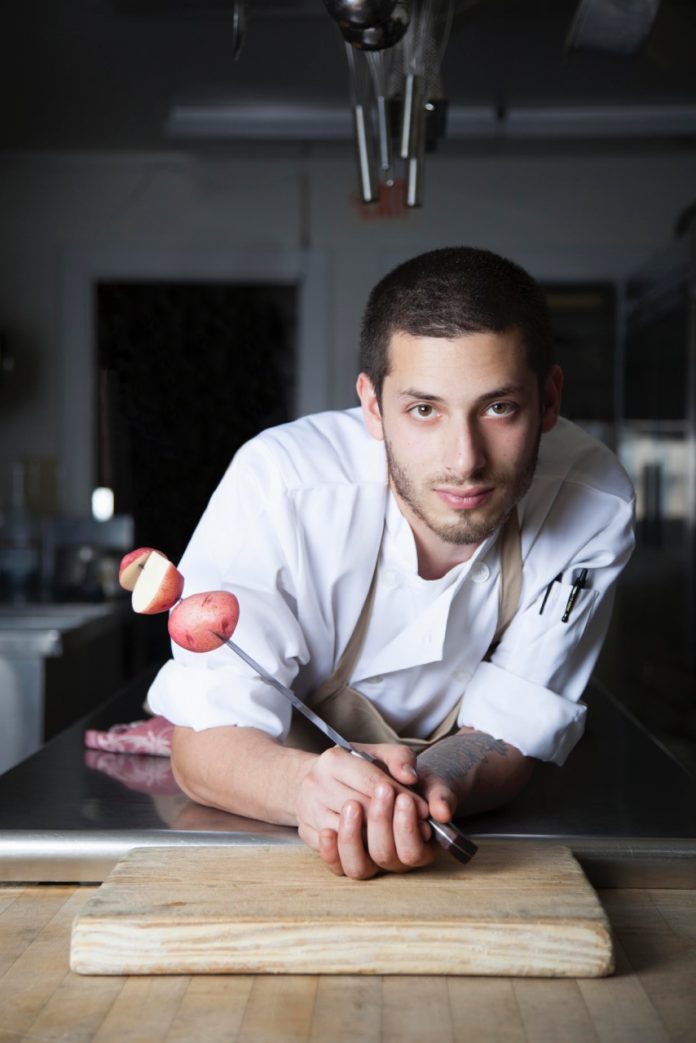 All images by Jeffrey Morgan Photography

Last fall, pop-up chef Jarrett Stieber launched Eat Me Speak Me at Candler Park Market, a two-part dining and drinking experience that quickly culled a loyal following. Like most pop-ups, the concept was pretty straightforward. Stieber would cook a succinct menu inspired by locally-sourced ingredients, and then with the help of a tiny map and password, you’d end the evening in a secret location imbibing with fellow diners. Setups like this allow chefs in the process of establishing themselves an opportunity to connect directly with adventurous eaters, and in Stieber’s case, gives him a work-life flexibility uncommon to the average line cook.

Before beginning the pop-up, the 24-year-old Stieber split time running the charcuterie program for Asheville chef Elliott Moss and collaborating with the coffee connoisseurs from Steady Hand Pour House. Stieber’s career began at the age 15, when he made prepared foods at Alon’s Bakery in Morningside. He attended Le Cordon Bleu in Tucker, where he staged at 5 Season’s, Joël, and worked at Pura Vida under Hector Santiago. He then followed up externships at Restaurant Eugene and Holeman & Finch with jobs at Abattoir under Josh Hopkins and Empire State South under Ryan Smith, with whom he worked as butcher and charcutier for two and a half years.

I found the Eat Me Speak Me vibe a cross between supper club intimate, with the ease of a house party. Stieber’s offerings included crispy tofu with sunchokes and black sesame, fresh turnips served with daikon and pickled bok choi, as well as buttermilk fried chicken with pieces of sweet potato and ripe watermelon. One night’s collaboration was with Orpheus Brewing, one of many anticipated breweries expected to open this year. The selection of saisons served from a cooler in co-founder Andrew Lorber’s living room were refreshing counterparts to a filling meal.

Stieber and I caught up right after he launched the most recent iteration of Eat Me Speak Me at Gato Bizco Café. The entrepreneurial chef can also be found at the General Muir Wednesday through Friday from 10:30 a.m. to 4:30 p.m, as our own Bill Addison recently tweeted.

What’s so appealing about being a pop-up chef? Freedom. I’m not winning any Michelin stars this way, but I would rather have some good Michelin tires at this point. I answer to myself, cook what I want to, source the ingredients I want. I get to test out ideas before setting up my own brick and mortar restaurant. That is an end goal of mine. Until that time comes, I’m gonna pop-up the hell out of this amazing city.

What was the impetus for Eat Me? It started as a pop-up with Steady Hand at Candler Park Market but we mutually agreed to focus on food and I moved forward. We served five nights a week at CPM to establish myself as a chef. I had a desire to exclusively use local ingredients on a fun, constantly changing menu.

What was your thinking behind having Speak Me at a secondary location? The Speak Me part was born much the same way as Prohibition-era speakeasies were born. Legal restrictions prevented me from even allowing people to bring their own drinks to CPM. But I wanted to offer creative beverage options for my diners. I figured since my cooking setup was already unorthodox, I might as well keep it going in that direction—not just a lame bar with a speakeasy concept that isn’t actually a speakeasy.

Orpheus Brewing was a popular collaboration with several saisons, and you worked with John Wayne Kendrick (ESS barkeep). Who else? I have some of the most amazing, talented friends in the world—cooks, design folks, alcohol specialists— so finding people to do the speakeasy was often difficult schedule wise, but never for lack of interest. Other bartenders included Adam Fox (The Dogwood Table), Steven Grubbs (ESS), Tim Faulkner (Umi Sushi), Julian Goglia (Pinewood Tippling Room), John Fogleman and Michael Packard (Octane Coffee) and Tyler Nelson (New Holland Brewing).

Let’s talk Gato Bizco Café Sunday Nights. What’s the vibe? Eat Me Speak Me will be on Sunday nights, serving dinner out of Gato Café. We have some big names lined up already and are working on scheduling more. I’m good friends with Allen Suh and James Ellington, so we are excited to share the same roof and be creative together.