It’s been a good year for Jarrett Stieber, who launched his Eat Me Speak Me pop-up at Candler Park Market last fall. Stieber has spent the last few months cooking up lunch at the General Muir and dinner at Gato Bizco, but as with all roving chefs, nothing is ever permanent. His lunch pop-up at the General Muir will end next Friday (June 13), and he’ll soon be spending two nights a week at Gato.

Below, Stieber talks about his next steps, including his own supper club.

So what’s new? Well, I’m wrapping up at the General Muir to do two days a week at Gato (I’ve been doing one). So Eat Me Speak Me will be Sundays and Mondays (starting June 17th) and Arigato Tuesdays through Thursdays.

How did the pop-up at General Muir go? It’s been amazing collaborating. I learned a lot about cooking more Israeli-style food. It’s a different way than I like to cook. I get my vegetables first and then figure out a menu.

What were you cooking there? I’ve avoided doing sandwiches because the General Muir has that. I did a warm grain dish—polenta or grits with spring garlic, onion, and a fried baguette. I did a salad, and yogurt with pickled strawberries.

Why’d you decide to leave? We agreed it would be a semi-permanent thing. Gato is kind of a small family. We don’t have a big staff. We have to be there to pick up the slack for each other when things change. The guy who had been doing Monday night is taking off. Arigato chef Allen Suh and I work well and are happy to be collaborating.

For those who don’t know, can you explain how the two differ? Arigato has a Japanese vibe—ramen, sashimi, and everything is a la carte.

Eat Me Speak Me is locally sourced, and the menu changes weekly. Sunday nights are Speakeasy Nights. A different bartender sets up in someone’s house within walking distance. There’s no charge [for the speakeasy portion]—it’s donation based. If there’s a wait for dinner, we give people the address while they wait for tables. We don’t take reservations for either.

For Monday nights, we’ll come up with a different gimmick. We’re toying with the idea of meat and three or Meatloaf Mondays. We’d still offer the regular menu, but maybe [also] have an off-menu meatloaf with a small salad and warm vegetable.

Gato is always BYOB, so people can drink what they want to.

Do you have other pop-ups planned? I’d like to hunker down at Gato for a while. I’ve been running around thin and really want to focus. I’m looking to do more interesting collaborations. We did an Eat Me Read Me with Acapella Books last Saturday. That might be a partnership for when they have a food-related book. Octane Coffee would like to do something down the road, but there’s nothing on the books yet. Tentatively, Elliot Moss from Asheville, N.C. will cook for a night or two in August at Eat Me Speak Me.

What bartenders do you have lined up for the speakeasy portion? Melissa Davis from Woodfire Grill, Paul Calvert will do one in August.

I heard you have a supper club now, too? The supper club is on Saturday nights for ten to twelve people. When I schedule a date, I blast it out to my email list and the first people to respond get in. It’s a three-course thing that will [officially] start mid or late July. It’s more of an intimate thing. Prix fixe makes it feel like more of a formal setting. Eat Me Speak Me is kind of punky with an irreverent vibe. The supper club is a little more refined and sophisticated.

The first couple I’ve done have been really loose. Sixty-five dollars a head,all BYO, no pairings. But you get a muse, an intermezzo, and all that stuff.

Where are the supper clubs held? In the Candler Park area in private residences with a communal table. I’m open to other people who are interested in hosting, too. It’s a nice way to do something at a different pace than the frenetic pace of dinner service at Gato. There, we tend to fill up and stay busy. This way, you can talk to the guests more about the dishes and ingredients It’s cool to see how the guests bond throughout the course of the evening.

What kind of dishes do you make for the supper club? Let’s see. At the last one I did a first course of heirloom tomato salad with coffee vinaigrette, peanuts, and raw mustard greens. The second course is braised brisket with romesco, baby leeks, and scarlett turnips. For dessert I did a Georgia strawberry tart with candied black sesame seed honey yogurt, and cornmeal streusel.

Are you going to open your own restaurant? I am thinking about it, in maybe one-and-a-half to three years.

Where would it be? Somewhere small, where we can focus on seasonal and local [dishes]. It’s hard to think about what neighborhoods will have good foot traffic and be considered cool this far out. I want a more adventurous clientele who want to eat interesting food and really be pushed on their preconceived notions of food. 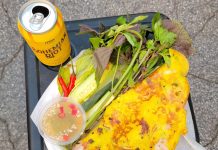 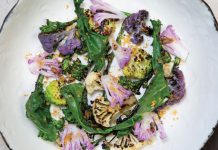