Home Restaurants Q&A with design firm ai3
ATL Food Chatter: March 8, 2011
(To receive the Chatter and other culinary tidbits directly in your inbox, sign up for our weekly dining newsletter)
Westside design firm ai3 has envisioned many interiors of Atlanta’s current generation of vanguard restaurants, including Holeman and Finch, Miller Union, Bocado, Flip Burger Boutique, 4th and Swift, and recently, Local Three. We gave a shout-out to principals Dan Maas, Joe Remling, and husband-wife team Lucy Aiken-Johnson and Patrick Johnson in December’s Best of Atlanta issue, but I wanted to get some insight about their approach with clients and the spaces they transform into modern, inviting dining rooms.

Q: How would you define your style when you work with clients opening a restaurant?
ai3: We recognize that creating a good design is only half the challenge in what we do. The other half is being able to understand and articulate our client’s vision down to the minutiae. A lot of designers claim to do this, but what they actually do is create a version of their client’s vision that plays up to their own preferences and strengths. That’s something the team at ai3 simply doesn’t do – it’s quite the opposite, actually. In early conversations, we share our clients’ “Vision Books” so potential clients may see the development of the story and how THEIR voice drives our process. We allow our clients to challenge us. We get into the heads of chefs and owners so we can get to the core of their inspirations, likes, dislikes and so on. Our clients know they are going to get the best articulation of their vision—we truly believe that is what’s driven our success so far.

Q: What has been your toughest challenge in terms of adapting a space in your recent projects and why?
ai3: Transforming the old Joël Brasserie space into Local Three was quite a feat. The location and the existing design were major hurdles we had to overcome to achieve the vision of the ownership team. How do you create a sophisticated neighborhood feel from a space that’s been built on the notion of “grandiose?” It was a tough one, but the design is incredible and Local Three is doing really well.

Miller Union was another challenge because the vision was to create intimacy by creating little nooks and separate seating areas. That’s easy to do in a big space, but Miller Union is a relatively small restaurant. We maximized every square inch of that space and created a space that offers different variations of the dining experience. If you’re eating at one of the long tables to the right of the bar, it’s more communal and open. But, the tables in the “pantry” provide much more intimacy.

Q: From where do you draw your inspiration when your clients engage you to interpret their vision?
ai3: Being a great first date. Our biggest source comes while listening during the Vision Session, a process inspired by our desire to have a meaningful dialogue with each client. We allow them to share their philosophy and the experience they want to create and explore opportunities for innovation.We ask our clients to share imagery of things they like and respond to our own visual cues of lighting, texture, and context.

Last week, each or our designers was given a $50 allowance to purchase a book that would inspire our design thinking. We shared our books over our weekly Monday “Recess” luncheon.  Book topics ranged from cookbooks to food journeys, comic books to maps as art, and origami animals and the Quilts of Gee’s Bend.


Q: What are some of the new projects you are working on for 2011?
ai3: Cibo e Beve—an Italian concept from Linda Harrell, the corporate chef at 101 Concepts whose resume includes Meehan’s Public House and Antica Posta. Scheduled to open later this year in Sandy Springs, Cibo e Beve will offer a neighborhood bar and restaurant designed to make patrons feel like they’re visiting a family kitchen.

Seed Kitchen & Bar—Douglas Turbush, previously the executive chef at Bluepointe, is opening his own restaurant in East Cobb. Located in Merchant’s Walk, this new restaurant and its design will reflect a depth of flavors influenced by the chef’s travels to Asia, the Southwest and Latin America. Seed is scheduled to open in September 2011.

Q: Outside of your own projects, what restaurants do you like?
ai3: After polling the group, we had several that were mentioned repeatedly, for the experience and the food: Antico, H. Harper Station, Fritti, Ecco, Leon’s Full Service, Krog Bar, JCT Kitchen, and Top Flr.

NEWS AND NOTES:
Beginning Saturday, March 12, the Urban Picnic will again be held every second Saturday and every last Friday of the month at the Sweet Auburn Curb Market. Between six and ten food trucks and street vendors will participate, such as Yumbii, King of Pops and The Good Food Truck.

Frommer’s has rated One Flew South as one the top ten Airport restaurants in America.

Buckhead. Kyma chef Pano I. Karatassos will be one of the celebrity chefs cooking at the gala reception following the ceremony at the James Beard Foundation Awards on Monday, May 9, 2011.

Decatur. According to Decatur Patch, popular neighborhood watering hole Trackside Tavern is slated to reopen this month after being closed for more than two years due fire damage.

Druid Hills. The AJC is reporting that Bad Dog Taqueria is slated to open this spring in the former Sprouts Green Cafe spot in Emory Village.

Kirkwood. Dulce Vegan Bakery and Cafe is opening in the former Gathering Grounds Coffee House at 1994 Hosea Williams Drive by the end off the month, according to What Now Atlanta.

Southwest Atlanta. Creative Loafing is reporting that Lunacy Black Market owner/chef Paul Luna is planning a restaurant project in the Capital View community that will not only serve food but also offer opportunities for local entrepreneurs to operate food businesses.

Westside. Last week marked the reopening of the Local Farmstand at Star Provisions. Anne Quatrano and her team have assumed responsibility for the small space, which has been given a makeover Martha Stewart would swoon over. Beyond local produce and eggs from Quatrano’s farm, there is now an abundance of gardening supplies.

Question of the Week: Name the new local operators who will bring their wood-fired pizza oven to your event or backyard party. 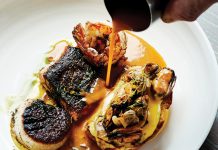