Home Restaurants Q&A with designer Smith Hanes
ATL Food Chatter: March 15, 2011
(To receive the Chatter and other culinary tidbits directly in your inbox, sign up for our weekly dining newsletter)
In yet another year when restaurant openings that hold promise for engaging, individualistic cooking are too few and far between, no. 246—opening in Decatur in May—is among a handful of projects generating lots of anticipation. The Cal-Ital-themed restaurant (think Meyer lemon and sheep’s milk ricotta agnolotti, pizzas, and wood-roasted whole fish) is a partnership between JCT Kitchen chef-owner Ford Fry and Drew Belline, the former longtime chef de cuisine of Floataway Cafe who will serve as 246’s executive chef. But the restaurant’s designer, Smith Hanes, brings some star power to the project as well. Hanes has built his reputation locally by bringing an earthy, textural aesthetic, with prominent use of reclaimed materials, in his commercial designs, which include projects for Serenbe, JCT Kitchen and Bar, and Bella Cucina (his wife is owner Alisa Barry). Hanes shares some details about 246’s forthcoming interior and his inspiration for the design.

Q: How did you win the job? Was there a long period of competition for the job or did you go to Ford with your ideas and he immediately bought in?
SH: Ford is the type to envision and imagine a restaurant and its food long before he builds it. I got the first call in March of last year, when he was interviewing designers. I met with him probably six times before I was engaged to design it in December.

I designed JCT Kitchen and Bar for him four years ago. It has been a smashing success. It’s an eatery that people just gravitate to—so comfortable and unpretentious and the food’s just always good. So the marriage of the two, my design and his culinary props … it seemed to make sense for this new place.

Q: How would you describe the look of no. 246?
SH: Classic, urban, vibrant, everyday, [with a neighborhood feel that evokes] both the present and the historical.

Q: What, if any, restaurants did you draw your inspiration from?
SH: It’s like a cross between a hangout in Brooklyn, with the bones of a classic cafe in Rome, and some fresh new touches one might find in San Fran or Melbourne. If you want some names—Dell’Anima in New York, Bar Tartine in SF, and Gusto Pizzeria in Rome.

Q: What will the customer experience when they enter no. 246 ?
SH: The earthy aromatic fragrance of an oak wood fire will greet them. The mood is decidedly romantic, but not frivolous or too flirty. Soft, beautiful lighting illuminates the art featured around the restaurant. It’ll be a comfortable place where you sit at the bar for a few bites and a glass of Sangiovese or linger with friends at a table savoring the seasonal foods.

NEWS AND NOTES:
On Saturday, April 9, The Atlanta Street Food Summit will be held from 10am–12 noon, at the Helene S. Mills Senior Center, 515 JW Dobbs Avenue, 30312. Atlanta District 2 City Councilmember Kwanza Hall and Fulton District 6 County Commissioner Joan Garner will host the summit. A portion of the program will be devoted to an overview of the permitting process so that anyone interested in operating a food truck/cart knows what you need to do at both the city and the county, what you can and can’t do currently, and so forth. The program will also feature a national overview of the street food movement. Councilmember Hall, Commissioner Garner, and Greg Smith from the Atlanta Street Food Coalition will provide an update regarding legislation in the works to make the process of starting a street food business easier. For further details, contact: khall@atlantaga.gov or 404-330-6038.

The 19th annual High Museum of Art Wine Auction, “The Ultimate Collection: A Sumptuous Blend of Wine, Art, Food and Friends,” is scheduled for March 23–26 and will take place under its trademark big-top tents in Atlantic Station. For additional details visit:

Sandy Springs. Castellucci Hospitality, the restaurant group behind the Iberian Pig and the Sugo restaurants, is slated to open their third restaurant concept, Double Zero Napoletana, featuring southern Italian cuisine and handmade Neapolitan pizza ovens, at 5825 Roswell Road by “mid-April,” according to What Now Atlanta.

Question of the Week: What is the new name of the revamped Thai spot formerly known as Rama 5?

PS: The answer to last week’s QOTW—Name the new local operators who will bring their wood-fired pizza oven to your event or backyard party—is S&J Wood Fired Pizza
Advertisement 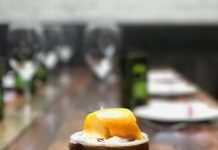