Home Restaurants Q&A with Duane Nutter of H. Harper Station
ATL Food Chatter: November 15, 2010
(To receive the Chatter and other culinary tidbits directly in your inbox, sign up for our weekly dining newsletter)
Lush Life Group, the folks behind One Flew South in Hartsfield-Jackson, last week opened H. Harper Station—a Southern-minded spot on Memorial Drive in Reynoldstown that was formerly the Depot. Early menu highlight include a country ham plate, fish and grits, “Louisiana bouillabaisse” and a Germanic-sounding pumpernickel-crusted bass with gnocchi and mustard-braised kraut in a wheat beer broth. The libations stretch over twelve pages, featuring forty cocktails, twenty different bourbons, a tightly curated wine list, and over a dozen beers on tap.
Veteran chef Duane Nutter, whose resume also includes stints as a standup comedian, comedy career, shared some of the thoughts behind what he and general manager/mixologist Jerry Slater have put into H. Harper:

Q: How would you describe your approach to the menu?
DN: It’s personality driven: This is the food that Jerry, Reggie [Washington] and I like to eat. After working a seventeen-hour day, sometimes all I want is some of Mom’s mac-n-cheese with mustard greens. When I was eight years old, we moved from Louisiana to Seattle, and that’s why you see a dish like the house-cured salmon. And you can’t forget the building, which inspires classic drinks with a modern twist. Why not do the same with the food?

Q: What are some of the other projects that the Lush Life Group are planning for 2011?
DN: We are working on Sweet Georgia Brown’s Juke Joint with one of the owners of One Flew South. After a little R&R, we will get fired up for 2012. I’ll keep you posted..

Q: Where do you like to eat in Atlanta when you have the time?
DN: The Shed and Pura Vida are at the top of my list. Also: Home Grown, Craft, JCT Kitchen, and Rosebud.

Q: When are you going to get back into the comedy circuit?
DN: I would have to say some time in 2011, but you never know. A good friend of mine owns the Village Theatre, so you might catch me doing a little improv there.

Alpharetta. The Butcher’s Bakery & Deli has opened at 295 Rucker Road.

Atlantic Station. Which Wich, the Texas-based sandwich chain, is slated to open at 265 18th Street this December.

Cumberland/Galleria. Buckhead Pizza, a North Georgia-based group, is slated to open their fourth location in Galleria Mall by February 2011.

We’re hearing reports that the Atlanta branch of Il Mulino will close at the end of the week.

Edgewood. As Bill Addison posted on Twitter earlier today, Dynamic Dish chef-owner David Sweeney has decided to close his restaurant. The restaurant will remain open through the end of next week.

Question of the Week: What is the name of the restaurant that opened in the former Shipfeifer space this week?

PS. The answer to last week’s QOTW—What popular Vinings restaurant is being converted to a wine bar featuring Napa Technology WineStations?—is The River Room. It will become SIP @ Riverside.
Advertisement 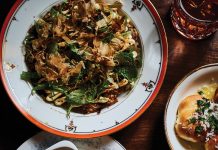 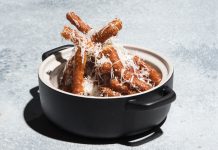