Home Restaurants Q&A with Molly Gunn of Delia’s Chicken Sausage Stand
ATL Food Chatter: March 28, 2011
(To receive the Chatter and other culinary tidbits directly in your inbox, sign up for our weekly dining newsletter)
Delia’s Chicken Sausage Stand, the East Atlanta Ormewood Park brainchild of two local culinary stars, has been open for less than a month and already is already creating a lot of buzz. Molly Gunn—who co-owns Little Five Point’s Porter Beer Bar with her husband and fellow Seeger’s alum, Nick Rutherford—and Delia Champion, the founder and former owner of the Flying Biscuit Cafe have created a charmingly kitschy, quick-serve concept based upon Champion’s famous sausage recipe. The cornerstone of the menu is the “slinger,” sausage sandwiches with a whirligig of toppings on H&F Bread Co. buns that are available late into the night.

After a recent visit, I asked Gunn about how the concept for the Stand came together.

Q: How would you describe the Chicken Sausage Stand concept?
MG: It’s all about the fun. In the restaurant industry, it’s sometimes hard to take a break and remember we do this because it’s fun. The menu is straightforward, but varied enough you could eat here everyday. We really want to be a neighborhood spot, where you can bring your kids, or your kickball team, or grab breakfast on the way to work.

Q: How did you guys come up with the location?
MG: Delia and I live nearby, and we felt like this neighborhood could use a “real food” option, as opposed to all the fast food on Moreland. Ormewood and East Atlanta Village feel like our neighborhood and we wanted to give back to the area.

Q: What has been your biggest surprise so far?
MG: We had no idea word would get out so fast! We are so lucky to have already had so many people come try us out!

Q: How do you split your time between the Stand and the Porter?
MG: When you’re opening a restaurant, it’s like a newborn baby, and it needs a lot of attention, so currently I’m at The Stand more than the Porter. The Porter is more like a teenager, pretty independent. It helps a lot that my husband [Nick] is there to keep an eye on things. I also have an amazing staff at The Porter, most of whom have been there since we opened. They really makes my job easier.

Buckhead. The former Cheyenne Bar and Grill is slated to reopen as The American Bar and Grill, according to a press release.

Decatur. Creative Loafing is reporting that Farmstead 303 is reconcepting its menu to “casual American Southern” and changing its name to Rail Kitchen & Bar.

Downtown. What Now Atlanta is reporting that The Beignet Collection—a Creole Cajun resto featuring beignets, gumbo and po-boys—opened March 25 in the Pencil Factory Flats and Shops.

Grant Park. Cake Hag has moved from its Downtown location to 575 Boulevard, and has added cookies and bars to its daily mix of treats and breakfast pastries.

Midtown. According to their PR firm, the newly re-flagged Renaissance Atlanta Midtown has named its restaurant (formerly Pacci when the hotel was the Palomar) Briza Restaurant and Rooftop Bar. It will be helmed by Janine Falvo who was previously top toque at The Lodge at Sonoma Resort and Spa, a Renaissance hotel. The restaurant and hotel will (re)open in April.
Several media outlets are reporting that Boardwalk Fresh Burgers & Fries will open its second Georgia location in Ansley Mall this summer.

Vinings. Canoe will launch the Song of the South live music series at the outdoor river bar on Wednesday, April 13, featuring live local artists every Wednesday evening from 7– 10 p.m. throughout the spring.

Question of the Week: What long-awaited, chef-owned pub opens in Morningside this week? 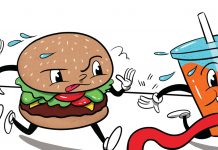 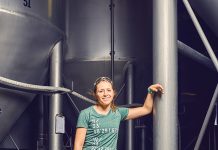