Last week in Orlando, the American Culinary Federation held the final round of its competition for National Pastry Chef of the Year, and local chef Heather Hurlbert brought the title home to Atlanta. Hurlbert has worked in restaurants, hotels and country clubs in the Atlanta area since 1996—she’s currently executive pastry chef at the Cherokee Town & Country Club. Just back from her big win, Hurlbert talked with Sara Levine about the competition and all things sweet.

How did you originally enter into the running for the title of National Pastry Chef of the Year?

You have to first be nominated, and I was nominated by my boss Kevin Walker, the executive chef [at Cherokee]. He actually won the national competition two years ago for Chef of the Year. Once you get nominated, you compete on the regional level. I competed against two other pastry chefs for the Southeast title, one from Florida and one from North Carolina. That was back in April in Charlotte. We had one hour to make one hot dessert, four plates. Once you win that regional title, obviously you get to move on to the national. I competed against three other chefs, winners from the other regions—Northeast, Central and West.

Is there any kind of prize that goes along with the win?

You know, I actually don’t know! I think it’s just the bragging rights to have that national title. I don’t go into these competitions for any prize or monetary reward, I’m just trying to have fun and try to push myself to see how far I can go and better myself.

What were the desserts you prepared for the judges in the finals?

For the national level, you have to do a hot dessert and a cold dessert, 6 plates of each. And you have to do a cake or a torte. You have three hours to cook and half an hour to set up. One of the desserts has to have Splenda—they’re a huge sponsor of the ACF conferences and conventions. I decided to use it in my torte, which was kind of a play on a black forest cake. Classically, it’s vanilla, chocolate and cherry. I wanted to use seasonal fruits in all of my desserts, so in the torte I used Bing cherries. I twisted it a little bit using Thai basil with my vanilla and star anise with my cherries. I used classical flavors but with a little bit of a twist. I called it a Vanilla Basil Bavarian with Chocolate Cake and Bing Cherry Gelee. I think it had about 7 different components and layers, and mind you it’s all sugar-free!

For the cold dessert I did a cinnamon custard layered with oatmeal crumble for a little bit of a crunch, with a caramelized glaze made with fresh peaches and raspberries. It also had a layer of fresh ginger panna cotta, and a kind of bruleed caramel layer, which comes out like a little caramel disk on top.

For the hot dessert, during the three hours I made a puff pastry dough from scratch, which adds higher, more difficult techniques that they factor into your score as well. It’s important just to show that you are able to do them. I filled the puff pastry with lemon curd and served it with a warm local strawberry compote, frozen yogurt, and garnished it with passion fruit tapioca.

What was the most stressful moment of the competition?

It ran fairly smoothly. In any competition, you don’t know if the ovens are calibrated correctly, they bring in different types and they’re brands you’ve never heard of, they may be the new item on the market. They have to train you how to work some of these ovens. That was an issue that I had to take on, and the one I was working with was running a little bit hotter. You have to adjust, you go into any competition having to think about that. Also my freezer, it wasn’t very cold. So what I did was, I always take dry ice. You can make a dry ice freezer and it will always set up and freeze instantly. I prepared ahead of time, knowing the issues that may be presented.

How did you prepare and practice before going to Florida?

It helps that they give you requirements that you can think through. I wanted to do it seasonally and use fruits that were fresh right now and in peak season. That’s how I first thought about putting desserts together, I also wanted to think locally. I have a farmer that I work with so I’m able to get fresh peaches, fresh strawberries. I think I practiced at least 25-30 times before going to Florida. Setting up, doing a practice run-through, cleaning up—it takes a good 7-8 hours of your day. I practiced every day.

Will you add any of the desserts you created for the competition to your menu at the club?

I probably will, but maybe without some of the elements. A dessert you do for a competition is a bit different from a plated dessert that you’re going to serve on your menu and that your cooks will have to execute. Some of those desserts I have done, or I’ve done a twist on some of those things. While I was practicing, I did put some of it on the dining room menu so I could practice it every day.

Do you watch cooking competition shows on TV, like Top Chef and Food Network Challenges? Would you ever want to compete on TV?

Some of them add a little too much drama for sensational value, I think. I do watch those sugar and chocolate and cake shows, and I definitely understand the pressure that they go through. I haven’t gone on one of those Food Network shows, I was actually asked a couple of years ago but I had a knee injury so I had to back out. I think those are really fun to do and I would definitely say yes.

Where have you worked previously in Atlanta?

I’ve been in Atlanta since ’96. I’m from Pennsylvania and have worked other places, but in Atlanta the longest. I left for two years and worked in Pittsburgh, and then came back. I worked at Blue Ridge Grill, was pastry chef there for a little while, and a lot of clubs—Atlanta Athletic Club, Piedmont Driving Club, the Four Seasons. I’ve worked at hotels, clubs, and restaurants here and elsewhere. I think country clubs allow me to be more creative, you get to work in other areas you may not in restaurants. We make breads, wedding cakes, grooms’ cakes; we do high-volume banquets and have multiple outlets rather than just one kitchen. I like having that variety. One day I may be just making truffles and candies, rather than just doing plated desserts all the time.

I love ice cream, I love making it and eating it.

Are you a chocolate or fruit-based dessert person?

That’s a hard one. I’d probably have to say chocolate. I can never say no to chocolate.

What other pastry chefs around town do you admire? Do you always order dessert when you go out to eat to see what others are doing?

Kathryn King over at Aria, I think she’s fantastic. I love her desserts because they’re simple and seasonal, clean in flavor, she’s not fussy with garnishing. I really like desserts that are approachable, easy to eat.

Do you bake at home? Cook?

Not really. I have a culinary degree, and I do cook at home. It’s a little different from what I’m doing at work, so it’s a stress reliever. If I have to bake I feel like I’m working.

How did you first get into pastry?

I started my pastry career at the Atlanta Athletic Club. They have their own pastry shop and I loved what they were doing. I’ve been studying art since I was 8 years old, and I thought, a lot of this is very artistic and very creative and hands-on. I thought, maybe I can work part-time and learn the basics of pastry. I think every hot foods chef should do that anyway, just to be more well-rounded. I was able to learn so I started doing that part-time and it was kind of an easy transition for me, I really really enjoyed it. They were doing gingerbread for a Christmas display and I found it fascinating how they were able to make this edible structure out of sugar and cookie dough and chocolate. That’s what really struck me about pastry—how artistic and creative you can be. 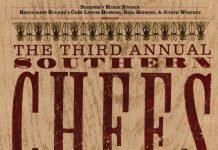