ATL Food Chatter: December 6, 2011
(To receive the Chatter and other culinary tidbits directly in your inbox, sign up for our weekly dining newsletter)

With a portfolio that includes the likes of Abattoir, Floataway Cafe, and West Egg Cafe, Square Feet Studio is hardly an ingénue among Atlanta’s restaurant design firms. But rave reviews of its work on Inman’s Park instantly popular Barcelona Wine Bar has spiked attention for the ten-year-old firm. The owners, husband and wife team John and Vivian Bencich chatted about how they got started and what’s on the drawing boards.

Q: How did Square Feet Studio get started?
A: We had always wanted to work for ourselves and felt that there weren’t enough design firms in town that treated interiors and architecture as one thing, so we wanted to fill that void. As we were scratching our heads about a firm name, we thought that combining an essential unit of measure like ‘square feet’ with the creative and collaborative notion of ‘studio’ would serve as a constant reminder to all of us what we were about, certainly more than “Bencich & Bencich” would. It’s important to us to have an office culture that embraces and encourages great ideas from client to contractor to intern, a place where everyone’s voice is heard no matter their discipline or experience level. We see the design process as very fluid between architecture and interiors and construction.

Q: When did you become more involved with restaurant design?
A: Early on we worked with the developers of Puritan Mill in West Midtown to design their first-generation tenant spaces, which were mainly advertising firms. They knew the value that we brought to their projects so they hired us to help with their next venture, which became White Provision. We also formed a relationship with the developers of Floataway Cafe, who are great supporters and friends of Anne Quatrano. They hired us to help with small improvements at Floataway and Quinones as far back as 2005 or so. Things just grew from there.

Q: With so many good Atlanta design firms in the restaurant design business, how have you been able to get some of the plum commissions such as Abattoir?
A: Good work with good clients will always create opportunities, and with Atlanta’s restaurant scene just exploding, we’ve been fortunate to build our small corner of the market. It’s about relationships. We have a lot of repeat clients which says something about our design process. They tell us that they enjoy working with us so they call us again and again. We also like to work with some of the same amazing craftspeople on our projects—they always bring great ideas and solutions to the table.

Q: What are some of the restaurant projects that you have on the boards?
A: Swit Bakery in West Midtown; Chick-fil-A in Lincoln Park, Chicago; and White Oak Kitchen & Cocktails on Peachtree at Baker Street in Downtown Atlanta.

Q: Where do you both like to eat in Atlanta?
A: Cakes & Ale, Bistro Niko, Fox Bros BBQ, Stone Soup, Rathbun’s, Babette’s Cafe, and Nakato—especially at the sushi bar.

Serious Eats included Holeman & Finch and Ann’s snack Bar on its listicle of “11 Burgers that are worth the hype”. The local duo ranked along side such boldface names like Shake Shack and Umami.

From November 26 through December 17, all three Ray’s Restaurants locations are participating in the Toys for Tots collection. Receive a free appetizer for bringing in a toy.

Decatur. Creative Loafing reports that Twains Billiards and Tap has hired local beer guy David Stein as head brewer. Stein, who has worked at the Brick Store and Ale Yeah, will assume his new position December 5.

The Atlanta Business Chronicle is reporting that the Hawks ownership group is spending $2 million to create Philips Arena’s first full-service restaurant, called RED (named for one of the Hawks’ team colors). The 250-seat renovation project, designed by the Johnson Studio, will remove seven rows of seats and extend the former Headlines Bar & Grill space into the seating bowl of the 20,000-seat arena. RED’s menu—designed in collaboration with Pano Karatassos, Levy Restaurants Team and a Hawks and Philips Arena task force—will feature contemporary American fare.

East Atlanta. Creative Loafing reports that the Australian Bakery at 436 Flat Shoals Avenue is closing in mid-December due to leasing issues.

Midtown. STK is slated to have a “soft” opening Thursday, December 15th , according to What Now Atlanta.

Morningside. Rosebud will host a night of seasonal cocktails and Christmas fun benefiting the Atlanta Day Shelter for Women and Children on December 15th, 2011 from 6 p.m. to 9 p.m.

Old Fourth Ward. On Tuesdays, Serpas True Food will offer Patty & a Pint Night, beginning tonight December 6, from 5:30 to 10 p.m. Executive chef Scott Serpas will serve a customizable version of his signature Big Papa’s single beef patty, a serving of crispy French fries and a choice of a draft beer pint from a rotating list beginning at $10.

Question of the Week : What metro area package store registered $1,000 in beer sales in 45 minutes last Sunday, the first day of legal Sunday beer sales in its jurisdiction? 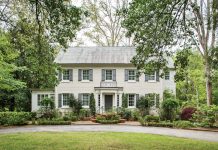 My Favorite House: A Druid Hills home with an untouched, classic exterior