In 2005 Mike Blum opened the Real Chow Baby on the ground floor of 1016 Lofts, across from Vintage Frozen Custard. The restaurant eventually closed in 2014 (Blum sold the concept in 2009 and was not associated with the restaurant at this point). Blum, along with partners Jose Hardy and Nicholas Bown-Crawford, is now going back to that same space with One Rooster, which will open in late May or early June and serve Mongolian bowls and Polynesian cocktails. “Mike is familiar with the concept, the type of ingredients, and the type of food, and the location has done really well for him in the past,” Hardy says. “There’s no stir fry concept in the area, so we feel like it’s a market that’s not being tapped.”

The 180-seat restaurant will offer a make-your-own line where diners pick their spices, proteins, sauces, vegetables, and base (noodles, rice, lettuce wrap, or soup). They can also opt to sit down and order from their table. The menu includes appetizers like chicken wings, conch frites, edamame, eggrolls, potstickers, calamari, coconut curry chicken soup, and chop suey salad, as well as a pineapple whip float for dessert.

The cocktail program will focus on Asian-Pacific cocktails, as well as shaved ice drinks and bubble teas. Wine and beer (a mix of domestics and internationals) will be available as well. The space itself features an open kitchen with a large wok, a covered patio, and light gray walls with an image of a rooster near the windows.

Update 5/13: This article originally and erroneously stated that T. Fable Jeon will design the cocktail program. This initial draft also implied that Mike Blum closed the restaurant in 2014. In fact, he had sold the concept to partners in 2009 and was no longer associated with the Real Chow Baby. 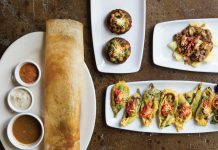 Ton Ton aims for August opening; plus another Guy Wong restaurant in the works 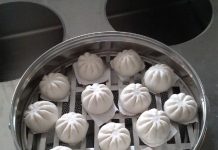