Linton and Gina Hopkins announced today that their plans to open a convivial, neighborhood restaurant called Eugene and Elizabeth’s in the former Restaurant Eugene space have changed. The pair are leaving the Aramore building space (2277 Peachtree Road) they’ve fed Atlantans in for the past 16 years and will instead look for a location that better fits the new concept. Until they secure a new space, the restaurant is essentially on hold.

“We want to be part of the fabric of a community where people can walk to our place. That’s what the new Eugene and Elizabeth’s is about,” Linton Hopkins says. “It should be part of your life the way a bistro in the 7th arrondissement [the affluent neighborhood that is home to the Eiffel Tower] in Paris is.”

He says he’s considering a new construction in a neighborhood nearby. He’s also interested in Atlanta BeltLine-adjacent locations.

“The Elizabeth and Eugene’s in my mind has more trees around it and a patio that’s not right on Peachtree,” he says. “I envision cool banquettes and great antique wooden cutting board(s)—a country French sensibility inside an urban environment.”

He adds that naming the restaurant after his grandparents makes it a “real special concept.”

Putting Eugene and Elizabeth’s on the backburner frees up time for Hopkins to focus on Holeman & Finch’s move to Colony Square in July. The new location will seat 125 guests (approximately double of the current restaurant), and serve brunch, lunch, dinner, and late-night fare—as well as possibly breakfast, he says.

“It’ll be an approachable community gathering place without aristocracy,” he says. “It’s really good, made-from-scratch food that ties into our local supply chain with zero chemicals.”

The burger will be there, of course, as well a “reinvigorated” charcuterie and cheese program.

In addition to the restaurant, Holeman & Finch will create an outdoor coffee and cocktail kiosk facing Colony Square’s lawn. Pastry chef Jen Yee will make pastries and desserts. Grab-and-go salads and sandwiches will be available at lunchtime. 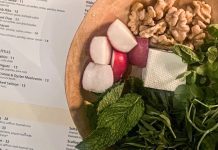