The big news on this past National Doughnut Day in Atlanta was the opening of Revolution Doughnuts in Decatur, right next to the popular craft beer market Ale Yeah!. The venture comes from the folks formerly behind Little Red Hen Bakeshop, the name under which proprietor Maria Riggs had been selling baked goods at area farmers markets and through Farm Burger. The shop boasts admirable ingredients (organic flour, local dairy, bacon crumbles from the Spotted Trotter, fresh fruit) as well as some vegan and gluten free options. Peach fritters, bacon and salted caramel, and blueberry were among the selection available when I dropped in on Friday.

Aside from building a following through selling at farmers markets as Little Red Hen, the shop launched a successful Kickstarter campaign that let customers pledge in return for doughnut rewards. That community support probably helped contribute to the eager storm of Twitter activity that followed shortly after they opened their doors. Below, a few drool-worthy Instagram photos from their opening on National Doughnut Day. 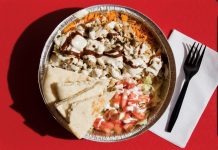 Fresh on the Scene: The Halal Guys, Makimono, Yumbii, and Revolution Doughnuts