Home Restaurants Ribalta to replace Piola in Midtown in late May

Last month Italian pizza chain Piola closed its Midtown location. It was then announced that Ribalta, another pizza spot with a sister restaurant in New York City, was to replace it. Turns out, Ribalta replaced Piola in New York, too.

“We have no connection with Piola whatsoever. We are not a chain,” says Ribalta co-founder Rosario Procino, who is credited with opening Keste, one of the early Neapolitan pizzerias in the U.S.

Scheduled to open the last week in May at 1080 Peachtree Street, Ribalta will offer both Neapolitan pies and a twice-baked extra crispy style called in pala, as well as gluten-free options. It will serve lunch and dinner seven days a week. Procino shares more details below.

Why do you think Ribalta will succeed where Piola failed, given that they are both pizzerias in the same location?
Piola seemed like more of a chain. It’s an Italian concept developed in Brazil. We think [the space] is a fantastic location to put a completely new concept. It’s the heart of Atlanta in a beautiful vibrant neighborhood.

What’s on the menu?
It’s based on pizza, but we also offer small plates and pastas, and one meat and one fish [option]. It’s authentic Neapolitan cuisine from Naples. Small plates and pizza will be the strength of the menu.

Tell me about the pizza offerings.
We have two kinds: Napoletana pizza is prepared in a bell-shaped, wood-burning oven. It’s the typical round pizza that’s softer and thicker because the dough breathes for up to five or six days. Pizza In Pala is lighter and crunchier and cooked in a different oven. It comes in a large square for two to share. We do gluten-free, too. We also bake own bread.

Atlanta has seen a huge flux of pizzerias in the last couple of years. Why do you think the city needs yet another one?
Atlanta is becoming a destination for the new pizzeria. I feel like I am bringing a piece of the Old Town [Naples] to Atlanta.

How will the menu in Atlanta differ from that at Ribalta New York?
The majority will be the same, but we try to do more dishes in line with the region. In New York we have a chicken wing with limoncello. Obviously chicken wing is not an Italian plate but it’s typical of the U.S. We’ll try to do some dishes that tie in this region.

Who will be in the kitchen?
The executive chef from New York will oversee both restaurants. A local chef from Italy has been brought in to work in Atlanta: Paolo Spadaro. I work on the dining room side, making sure it’s a happy atmosphere. The local managers are Italian as well.

What will the atmosphere be like?
It’s a sit-down restaurant. We do delivery and takeout, but mostly sit-down. It’ll be modern looking and white and as casual as it can be. We try to make it a fun environment.

What kind of beverages will be available?
It’ll be a full bar, but when we first open we’ll start with beer and wine only. One cocktail that we are well known for in New York is the Aperol Spritz—prosecco, soda, and apero. It’s our signature cocktail. We try to stay up on local trends and use fresh fruits and such.

Do you import your ingredients from Italy?
We are one of the very few certified pizzerias for Neapolitan pizza—the traditional way of making pizza. We use bufala mozzarella and fresh mozzarella, and San Marzano tomatoes. We use local ingredients and imported—whatever’s the best.

The New York menu is pretty large. How do you feel about substitutions?
Fine, fine! Customers can make their own pizzas by adding their own toppings to our margarita and bianca. We feel this is the way to keep up with the customer satisfaction. 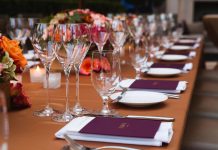