Atlanta’s dining scene—slower with restaurant openings these days but still undeniably energetic—is always introducing new cooking talents. Here are three chefs, either new to the city or new to running their own kitchen, whose food I have recently experienced and who I suspect have promising futures:

Lance Gummere. The top toque at The Shed at Glenwood, who worked for several years under Shaun Doty, keeps his menu in seasonal flux with New American dishes heavy on local ingredients. Check out his pan-fried chicken hearts.

Andrea Montobbio. The 25-year-old native of Capriata d’Orba in Northern Italy keeps the menu at Taverna Fiorentina on Cobb Parkway focused on traditional Italian dishes. (He sneaks in some modern twists—walnuts, raisins, and bacon in a beet salad, for example.) I really enjoyed his wild boar pappardelle.

Keira Moritz. A Georgia native, Moritz has returned from San Francisco to lead the trattoria-meets-steakhouse concept at Pacci in Midtown’s Palamar hotel. Her take on pasta is not to be missed, and check out the nibbles she created for the hotel’s open-air bar, AltoRex.

Other notable up-and-comers such as Scott Hemmerly at Neo and Daniel Chance at 30 Tables also show great promise. Any other names you’d put on the list of Atlanta’s new cooking talents?

Buckhead. Repeat Atlanta is reporting that Lenox Marketplace will be the new home to Atlanta’s eighth Buffalo Wild Wings. Opening August 2nd, it will be the franchise’s first store ITP.  The site also reports that the former Rock Bottom space will soon reopen as another Gordon Biersch outlet.

Decatur. Look for both Yoforia and Yogurt Tap, a self-serve yogurt shop, to open by mid-July on College Avenue in downtown Decatur.

Midtown. Dogwood is celebrating its first anniversary on July 20th with a special wine dinner in partnership with Napa’s Falcor Winery. Ten percent of the evening’s proceeds will be donated to Breast Friends for their fight against breast cancer.

Old Fourth Ward. Beginning this past Saturday, July 4, from 8 a.m. until 1p.m., Michele Niesen (former chef/owner of the Supper Club and Billy Goat’s Cantina) will run Courtyard Market in the Studioplex development at 659 Auburn Avenue every Saturday until November. The market will feature local produce and prepared foods as well as crafts.

Poncey Highland. Two Urban Licks has installed their new open fire rotisserie and judging from some of the new menu items like the jerk rotisserie chicken and the lamb flat bread appetizer, Chef Cameron Thompson and crew will continue lighting up Atlanta’s culinary fires.

Question of the Week: What local entrepreneur/restaurateur is rumored to be looking at the former Macy’s building as the site for the first location of his latest concept?

PS. The answer to last week’s QOTW—What local restaurateur is rumored to be partnering on an organic farm-to-table concept with multiple locations?—is Shaun Doty. I spoke with Doty, who said that he and business partner Eric Maier of Better Brands Restaurant Group are still in the conceptual stage. 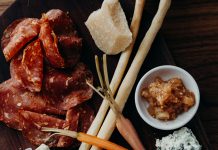 First Look: How the new Ecco Buckhead is different from the Midtown original

King Barbecue opens Tuesday at Avalon; check out the menu