Abe Thomas and Poorvi Chordia, founders of Atlanta-based Indian tea company Herbs & Kettles, source single-batch, single-origin teas from small, sustainable farms. As physicians, they merge their passion for holistic wellness, their Indian heritage, and their love of tea. Formerly executive chef at Kimball House, Philip Meeker is now a food educator, teaching others how to prepare nourishing cuisine. After bonding over their love of tea and food for health, the trio decided to collaborate on a tea cocktail and small bites event on January 22 at the Lola. For $45, attendees can sample three tea-infused alcoholic beverages, one non-alcoholic tea drink, plus three savory snacks and two desserts, each inspired by tea.

See, after meeting at the Community Farmers Market at Grant Park, where Herbs & Kettles has a table, Meeker and Chordia became friends. When Chordia visited Darjeeling, India, she bombarded Meeker with photos of the food and farms. When she returned, she and Meeker stayed up late into the night drinking tea and discussing spices and pairings.

“I started researching the cuisine around these farms and blending the flavors with the tastes around Atlanta. I wrote a few menus when I got home that night because I was feeling super creative,” Meeker says. “Each dish has tea in it as well, so we’re not doing pairings. Each tea stands on its own.”

He designed the Spiced Adoptogen Millet and Mushroom dish on Sunday’s menu around tea leaves Chordia sources from a forest where mushrooms grow. He flavors the mushrooms with Herbs & Kettles Spiced Adoptogen Latte leaves, and adds millet, which is also farmed in the area.

“Philip really understands tea and how to infuse it. Other people don’t know the science behind it,” Chordia says.

Intended as a taste-around, Sunday’s event will include drinks like Satsuma Lassi, made with dark rum, yogurt, Herbs & Kettles Chamomile tea, and sliced pecans, and a Bourbon Rose Cardamom Chai with bourbon and oat milk. Expect smoked catfish with red onion focaccia and Kashmiri Kahwa coconut ice cream, among other offerings.

“Herbs & Kettles is a family-owned business. My daughters come with me everywhere I go, and I wanted to make sure they could come to our first event,” Chordia says. “It’s a tea party. All drinks can be made non-alcoholic.”

Poori and Meeker expect about 100 guests. They’re both open to future pop-ups as well. “The hope is that Herbs & Kettles can build a community. We’ll do collaborations with other local chefs and bartenders, too,” Chordia says. Next up: an event with award-winning mixologist Tiffanie Barriere, formerly of One Flew South.

Tap the image below to view the menu for Sunday’s event. 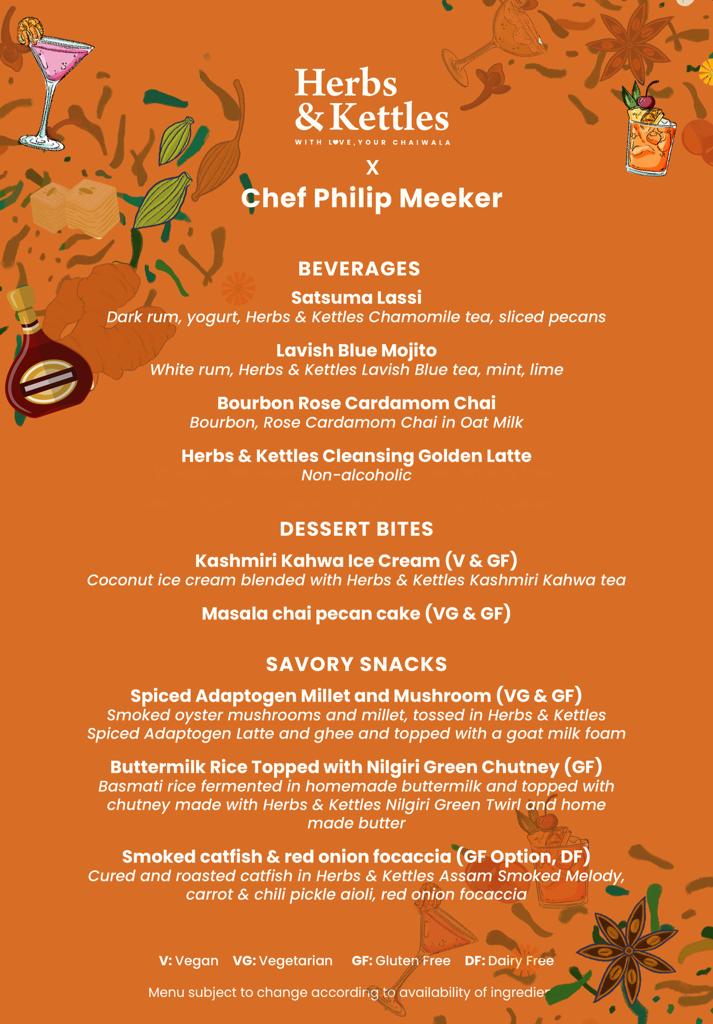