Home Uncategorized Seafood, health, and wellness to be themes at 2015 Atlanta Food &... 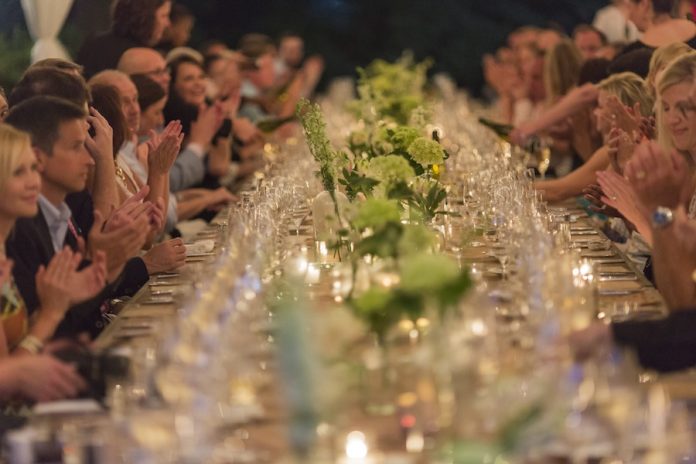 The fifth annual Atlanta Food & Wine Festival (AFWF) will be held May 28-31, and early bird ticket sales begin Friday, February 13. Founders Dominique Love and Elizabeth Feichter say this year’s guests should expect the unexpected with a bevy of new programming.

What are the programs you’re most excited about this year?

Dominique Love: Seafood continues to be something that’s very important to a lot of the talent. This year, we’re talking about invasive species. There’s a great class called “Malicious but Delicious.” Think tiger prawns that are delicious, but they are invading our waterways and doing some pretty serious damage. How as chefs and restaurateurs do you address these environmental issues by creating demand in your restaurant for these products?

We’ve had a lot of people talking about health and wellness, and some people say Southern food is so unhealthy, but our chefs beg to differ. A huge part of Southern food is cooking out of the garden and using fresh ingredients. Sure, we have fried foods and fattier foods that we all adore, but there’s another dimension to that. There’s a couple chefs talking about how that’s evolved. We even have a fun class called “Medicine and Moonshine,” so we’re talking about the health effects and how food plays a role in healthy living.

We also have a new partnership with Southern Living this year and have changed the technique lab into a Southern Living Test Kitchen Experience, where guests will be able to have a more interactive, hands-on experience and participate. Robby Melvin, the test kitchen director at Southern Living, will kick off the weekend with an academy. Steven Satterfield will host a class on summer harvests, and Michael Gulotta from New Orleans is teaming up with Matt McCallister from Texas to talk about approaching sustainability in a different way.

What else is new this year that guests can expect?

DL: It is our fifth anniversary, so we are embracing our motto of go big or go home in an even bigger way. We’re doing a Sunday brunch this year. By the time Sunday comes around after three days of a lot of eating, guests typically don’t want to do as many classes, they just want to have brunch to wrap up the weekend. We were inspired by Kevin Gillespie, so the brunch will have Gunshow-style service. We’ll still have classes on Sunday, but not as many.

We also have a new connoisseur dinner series for our connoisseur pass holders, which will be more intimate dinners. Our annual pig-out event this year is a market style theme and the venue will be Ponce City Market.

Elizabeth Feichter: We’re pairing some chefs who are already in Ponce City Market with some out of town talent and giving guests a first glimpse into the market. We’re also continuing to evolve the tasting tent set-up, so those will be more spread out and allow guests to journey through the tasting trails.

How has your vision for the festival changed since the first event in 2011?

EF: Our programming continues to evolve each year. We’ve stayed true to our vision and the mission for the festival, which is shining that international spotlight on Southern food and beverage traditions. We’ve found that the way our advisory council of chefs, mixologists, and sommeliers think about our three key themes has evolved. Those themes are new traditions, old traditions, and imports and inspirations. They influence our programming every year and allow us to take the vision of creating the festival that focuses exclusively on one region and honors Southern food and beverage traditions.

What are some of the challenges you’ve faced in the last five years?

DL: Our biggest obstacle was that we set out this lofty goal of shining an international spotlight on our region, and there’s so much depth to our food and beverage history here in the South, and that alone is very much a challenge. How do you pack what’s going on in the South into three days, and how do you position it in a way that is entertaining and engaging but people are also learning?

That leads to the second challenge of people understanding what we’re doing. People have this perception that we’re just a street festival, and actually the tasting tents are only one component of our weekend. Our learning experiences, the dinners, and events are a major part of the weekend. They all mesh together to tell the story of what’s going on. Year one, we were talking a lot about barbecue and bourbon. The next year, we got deeper into African American influences, the role of women, agriculture, and products from the farm. The next year we got deeper into Latin influences and the colonial south from the foodways. It’s just an evolution from year to year.

Today, there are Food & Wine festivals all over the country. What makes Atlanta’s event unique?

EF: That goes back to the core of our mission and who we are: we focus exclusively on the South. We are the only event in the country that focuses exclusively on one region. You won’t find wine from California at our event or cheese from Wisconsin.

DL: We aren’t just about the party; we really have a deeper mission. This year, one of the supporting goals of our mission is to entice people to the region to eat, drink, and explore. Tourism is big for us. We have now gone to the state level so that they can showcase the culinary happenings of their state. We also are focused on artisans and the smaller groups that are integral to the fabric of our culinary community. We have created an entrepreneur program for those people; we give them so much exposure and allow them to take advantage of social media to connect with guests.