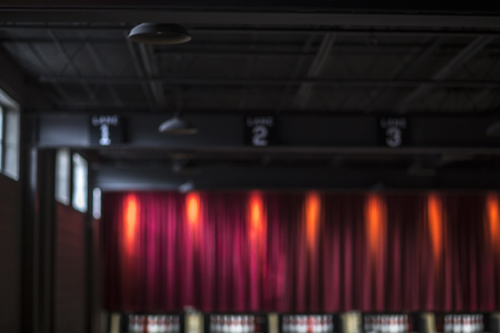 Justin Amick, an advanced sommelier and the son of Concentrics restaurateur Bob Amick, will soon open his 24,000-square-foot boutique bowling alley and entertainment complex, the Painted Pin, at 737 Miami Circle in Buckhead. The alley is at this time slated to open late next week.

Trip Sandifer, bar manager at the Spence (where Amick was general manager), will lead the beverage program with Thomas Collins (formerly of Parish) as executive chef.

Since the focus is entertainment—there are two bocce courts, a wine cork dartboard, two vintage ski-ball machines, and two basketball pop shots—, cocktails will be prioritized over food. Bound in vintage leather, the list will feature five signature cocktails, including a bourbon punch and a gin punch, Moscow mule slushies, and a Pin’s Cup. In addition, Amick and Sandifer have compiled a list of twenty-five of their favorite throwback drinks, from gin martinis with vermouth and orange bitters to aviations.

“Wine is my passion and my baby, but we’re trying to keep it relevant to the concept and the atmosphere,” Amick says.

The Painted Pin will serve eighteen wines by the glass and bottle, six draft beers, and ten bottled beers. Two of the lanes will have two taps, making self-poured beer available by the ounce. Amick says that the wines will focus on lighter reds such as pinot noir, gamay, sangiovese and grenache and drier whites like gruner veltliner, assyrtiko, albarino, and trocken riesling.

Food options will revolve around two Neopolitan-style pizza ovens. Roasted vegetables with ricotta béchamel and mozzerella, fried calamari with spicy tomato sauce, and spicy Spanish chorizo with Fresno chiles and salsa verde will top the pies. Sandwiches and sliders include the TPP—a play on the BLT—with tomatoes, peppered bacon, and pimento cheese on a Holeman & Finch roll. St. Louis-style ribs, a waffle dog, and fried chicken tacos will also be available.

“It’s all food meant to be shared—not knife and fork style,” Amick says.

As previously reported, The Painted Pin’s décor takes inspiration from industrial speakeasies and British preppy culture. The rectangular bar has a leather diamond tufted face with silver buckles and gas lanterns on the corners. There’s even a dance floor made from bowling alley floors of the 1960s and an indoor courtyard with eighteen sculpted hedges.

Amick had two Northamptonshire Hood Skittles tables specially made for the Painted Pin and has affectionately shortened the British pub game’s name to “Southern Skittles.” All games will be “winner stays on,” while the bowling lanes offer limited reservations.

Check out a few photos of the interior below: 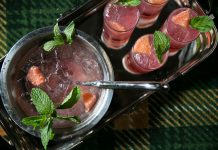