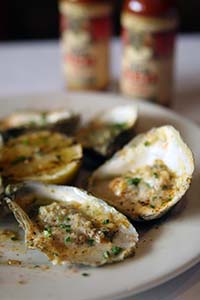 Hugo’s Oyster Bar, a new concept from C&S Seafood & Oyster Bar’s Rich Clark and chef Jon Schwenk, opens Saturday in Roswell. The restaurant will serve only seafood indigenous to Southern waters, from the Carolinas to New Orleans, with the exception of oysters, which will come from the Northeast due to the high quality there.

“It started as a New Orleans restaurant but we didn’t want to be pigeonholed,” Clark says. “The inspiration comes from our vacations in Hilton Head, Charleston, New Orleans, the Outer Banks, etc.”

A more casual restaurant than C&S, Hugo’s will offer Po’ boys and sandwiches, as well as oysters, steaks, and seafood entrees. Shared appetizers include smoked trout dip, crawfish and boudin balls, and Sapelo Island clams. Five types of oysters will be available, including chargrilled, fried, and Rockefeller. There’s a crawfish Po’ boy, a “baseball” sirloin (a thick, round cut), crawfish-stuffed flounder, Parmesan-crusted Gulf grouper, and grilled tuna. Lemon icebox pie and an Abita root beer float round out the dessert menu.

“We try to serve clean food; we believe less is more,” Clark says. “People think Southern cooking is fatty but this isn’t—not at all.”

With that mentality, it makes sense that the cocktail program at Hugo’s will focus on classics: Pimm’s Cup, White Manhattan, Sazarac, Old Fashioned, and more, with ingredients like bitters made in-house. The weekend brunch menu even features milk punch—a brandy cocktail made with milk and sweet and sour, shaken, and served with grated nutmeg on top.

“We created something we would want to go to,” Clark says. “We love sports, but the food at many sports bars is subpar. This is a place you can have a good time. It’s casual but not tacky.”