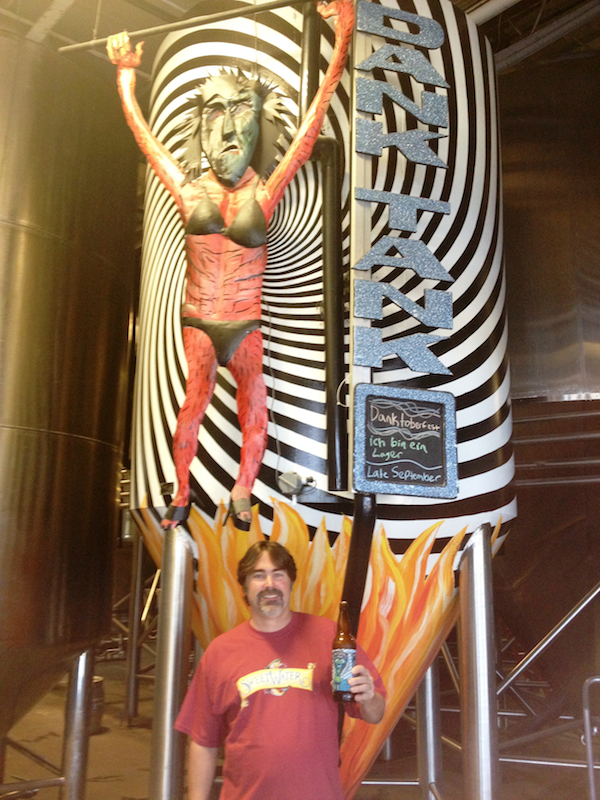 This week marks the release of SweetWater Brewery’s Danktoberfest, the latest in the Dank Tank series of rare yet popular limited-release brews. The Dank is indeed a tank at the brewery, set aside for specific pet projects — high alcohol, big flavor, and big-bodied beers that reflect whatever itch the brewers want to scratch. Last year we saw a double red ale in Fresh Sticky Nugs, as well as Ghoulash, whose undefined style is still being debated.

This go-round, head brewer Nick Nock helped pull together the ode to the smooth lagers of Deutschland, a major departure for this group, who has not been shy about their love of hops. Fifteen years in business have passed without wading into such deep lager territory. Here, Nock talks about Danktoberfest’s inspiration and creation. Reportedly, no brewers donned Bavarian attire in the making of this beer. I have my doubts.

Danktoberfest is very smooth and malty with some brighter, fruity notes on the top. Often Oktoberfest beers can be so smooth they’re boring, but this one packs a lot of flavor. What were you thinking about as you crafted the recipe? We really took this seriously. Our quality control manager, Paul Chlup, had a big part in putting the recipe together. All the malts are German. We got an Oktoberfest yeast strain, trying to be as accurate as possible. The other thing is most Oktoberfest beers aren’t going to be 8.5 percent. We were trying to make it as smooth and drinkable as possible but we also wanted it to be a high gravity beer. That was pretty tough. The only rule for beers in the Dank Tank series is that they be high gravity, but we can brew whatever we want. People know with Dank we’re going full swing, big beer.

What type of malts? The majority of our beers use Two Row malts as a base, which is where you’re going to get the sugars and the alcohol. With this beer, we used German Pilsner malt. Pilsners are light, refreshing and crisp, so that’s the backbone of this beer. And we also used Munich malts, which we also use in the 420. The basic Munich malt gives the beer a bready, biscuit-like character. Keeping with the German tradition, on Danktoberfest we used several different kinds of Munich — the basic, the Cara Munich that has a caramel accent to it, the Dark Munich that has a roasted quality and helps with the reddish, copper color, and Aromatic.

The whole “Ich Bin Ein Lager” approach is working for you. Why now? We were in a good spot. We’ve been going through this transition, the brewery expansion, the new bottling line, and getting all this new equipment in. We finally got into a position where we could have a Dank ferment for quite some time. With fall approaching, Oktoberfest became clear.

As with most SweetWater beers, there seems to be a good booze tale behind this one. The Danktoberfest bottle label includes a funny story about the so-called Mr. Dankenshnitzel and a “friendly fraulein” who “über servierts” him. Just who is this Mr. Dank? I had nothing to do with that! Yeah, I don’t know how that story came about, I think it was discussed over a couple of beers.

Any new happenings over there on Ottley Drive? We’re getting ready to put out the Festive, which was the first seasonal beer we ever did. This marks the fifteenth year for Festive. Then we’ll follow that with Happy Ending, which will be out sometime around New Years. I like to think that another Dank will be out around then, too. What that Dank is going to be is still up in the air — maybe something that could age for a little bit.

The Danktoberfest 22-ounce bottle is available in stores while supplies last, and the beer will also be served on draft at the brewery during select tour dates.