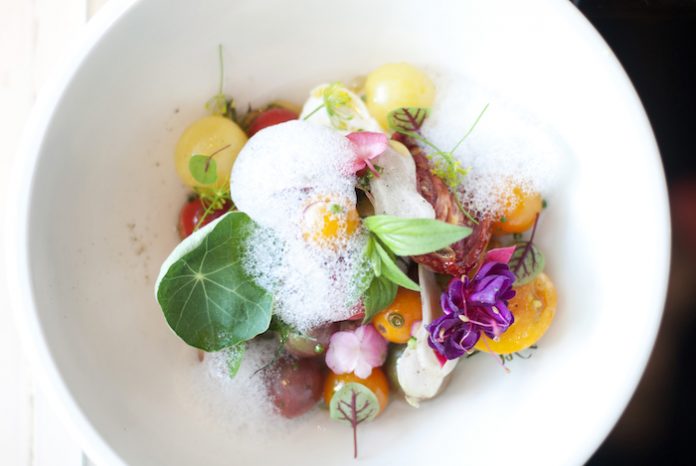 Hot Dish: Heirloom tomatoes at One Eared Stag
Tis’ the season. Wyatt William stopped by One Eared Stag last week where he and his friends were floored by a dish that is, wait for it, all produce. Kudos to Chef Robert Phalen.

Who deserves to run the new Hyatt Polaris restaurant?
What’s the cost of renting a rotating, blue spaceship in Downtown Atlanta? The Atlanta Business Chronicle is reporting that the Polaris restaurant is set to reopen, but the question remains as to who will run it.

Chicago-based chicken joint coming to Atlanta
Let the chicken wars begin. Harold’s Chicken and Ice Bar will open June 25 in the Old Fourth Ward. A consultant  for the restaurant said that “[Harold’s] will be home to one of the best fried chicken spots known in the midwest,”  according to What Now Atlanta.

New details on Kevin Rathbun’s new project, KR SteakBar
Eater Atlanta has the latest on Rathbun’s upcoming restaurant, which will take four months to build out. It appears that Rathbun will be ditching white table cloth for a less formal dining experience.

Don’t get left behind. Stay up to date on the latest dining news, events, and contests around Atlanta and sign up for our weekly dining newsletter.