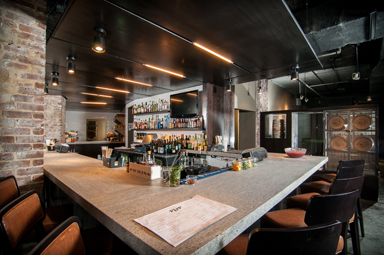 Your weekly roundup of the week’s biggest dining news.

Steven Satterfield of Miller Union reveals battle with cancer
Miller Union’s chef /owner Steven Satterfield disclosed via Facebook last week that he was diagnosed with cancer back in February. He stressed, though, that “the news is good…because it is my last day of chemotherapy. I could not be happier to be saying this. Today is my 21st dose. And I will only update more with good news…” Read more

Proof and Provision opens in Midtown Atlanta
The Georgian Terrace just earned some serious booze cred: Proof and Provision, located in the hotel’s basement, is now open after a media preview earlier this week. The bar and restaurant (see above photo) is the kind of low-ceiling, raw brick place where chicken liver mousse is served in tin cans and an intriguing cocktail list threatens your morning after. Read more

Revolution Doughnuts opens on National Doughnut Day
Sunny skies and cool breezes have not been the only sweet treats this week. Revolution Donuts in Decatur opened Monday on National Donut Day. Organic flour, local dairy, and fresh fruit are part of the philosophy behind this mom-and-pop treat emporium. Read more

Yumbii and Café at Pharr opens Joint Venture
For once a food truck and a restaurant are getting along. Yumbii and Café at Pharr came together Tuesday to open their Atlantic Station pop-up restaurant, which will continue through early August, according to Creative Loafing. Located in the space that formerly housed the Grape, the restaurant will feature a combined menu of sorts as well as a nightly comedy standup act. Read more

Peaches land early on Atlanta restaurant plates
Thank you, global warming? Our own Wyatt Williams is reporting that Georgia peaches arrived early this year thanks to an unusually warm winter and spring. The beloved fruit is quickly making its way into restaurant kitchens like Miller Union, Empire State South, and Farm Burger. Read more

AJC’s Kessler worries about chefs and special dinners
John Kessler has a question: Are chefs ignoring their restaurants? He wondered this week whether special dinners and festivals were keeping chefs away from their kitchens. At the same time, he worries about only seeing half the picture in the dining room. Read more

To receive our weekly Table Talk post and other culinary tidbits directly to your email, sign up for our weekly dining newsletter