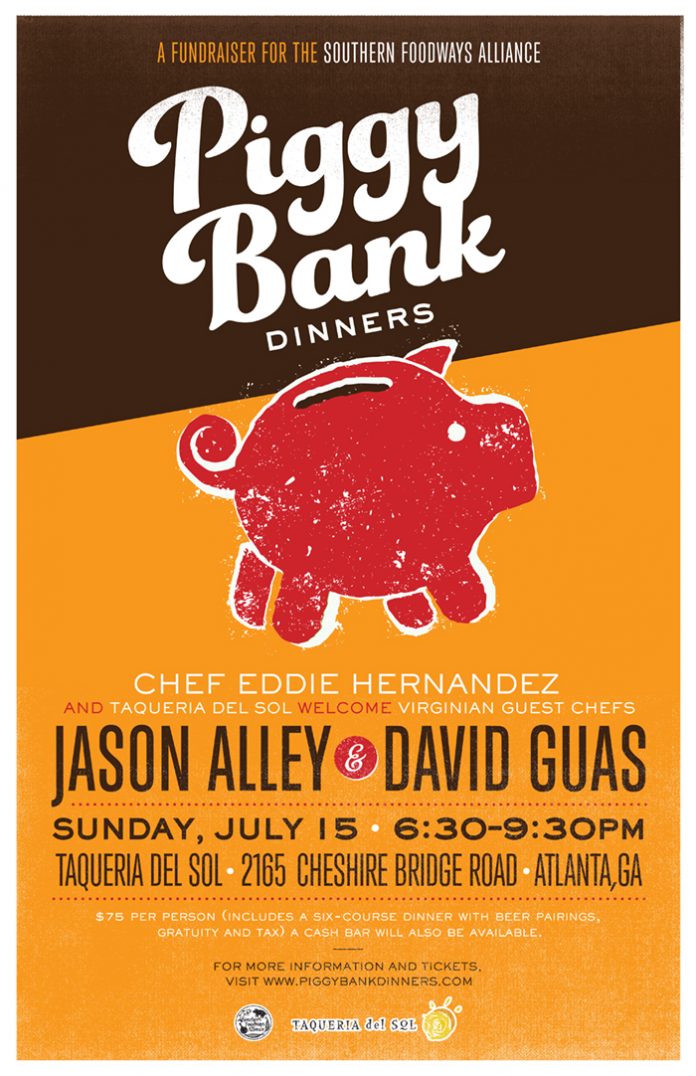 Taqueria Del Sol will launch a dinner series to benefit the Southern Foodways Alliance this week. The series, Piggy Bank Dinners, will feature guest-chefs from across the South and launches this Sunday, July 15 with chefs Jason Alley from Richmond, Virginia and David Guas from Arlington, Virginia.

Michael Klank, the co-owner of Taqueria Del Sol, says the idea for the dinners came from Chef Ashley Christensen in Raleigh, North Carolina, who supports the SFA through special dinners called “Stir the Pot.” Klank looks forward to bringing Alley and Guas to town, also noting “it’s a chance for Eddie [Hernandez] to do something more upscale. We’re excited about that.”

Tickets are $75 and include a six-course dinner with beer pairings, gratuity and tax. Proceeds from the Piggy Bank Dinners will go towards SFA. Highlights from Sunday’s dinner include meatloaf lollipops, charbroiled Rappahannock River oysters, flounder in lemon butter, and White Oak Pastures BBQ beef tri-tips.

Dubbed this country’s “most intellectually engaged (and probably most engaging) food society” by Atlantic Monthly, SFA is a non-profit organization based at the University of Mississippi dedicated to exploring the food cultures of the South. “Part of the thing about food and the Southern Foodways Alliance [is that] dining together brings people together,” Klank said.

For more information or to purchase tickets, visit piggybankdinners.com. The second Piggy Bank Dinner will look to North Carolina for its chefs and is scheduled for Sunday, November 11.