Home Uncategorized The chef behind Le Fat and Miso Izakaya has a new restaurant...

After 10 years on Edgewood Avenue, owner/chef Guy Wong closed his Asian small plates spot, Miso Izakaya, in 2018. Then, this past December, he sold his popular Westside Vietnamese restaurant, Le Fat. But lest you think he’s abandoning the industry, Wong has been busy working on his newest restaurant, an Asian fusion eatery called Ruby Chow’s that will officially open on February 20. It’s located in the former Gekko Sushi space (680 Glen Iris Drive Northeast) across from Ponce City Market, where Wong also operates Ton Ton ramen.

Named after an innovative Chinese-American restaurateur and politician in Seattle, Ruby Chow’s will be a “fun place with in-your-face patterns, textures, and colors,” Wong says.

His team renovated the space, enclosing the once-open kitchen to increase intimacy and expanding the bar. “It’s a darker space with pops of floral and brightness,” he says. A 40-seat patio will open in the spring.

Wong will helm the kitchen, making about 12 different small plates including braised pork belly and grits, a vegetarian General Tso’s “chicken,” and roasted bone marrow with onion jam and radish salad. A few large-format dishes, such as a Cantonese ginger-scallion lobster and a schnitzel with oxtail curry, will be featured as well. Expect to see some iterations on a few Miso Izakaya favorites, such as Peking duck and pork katsu buns and shoyu tamago.

He says the overall customer experience at Ruby Chow’s will be smoother than it was at Miso due to his experience and familiarity with the neighborhood community. Like Miso, Ruby Chow’s will also serve a late night menu of food and drinks until midnight Thursday through Sunday, beginning this spring. T. Fable Jeon, of Buckhead speakeasy Himitsu, will lead the restaurant’s beverage program. 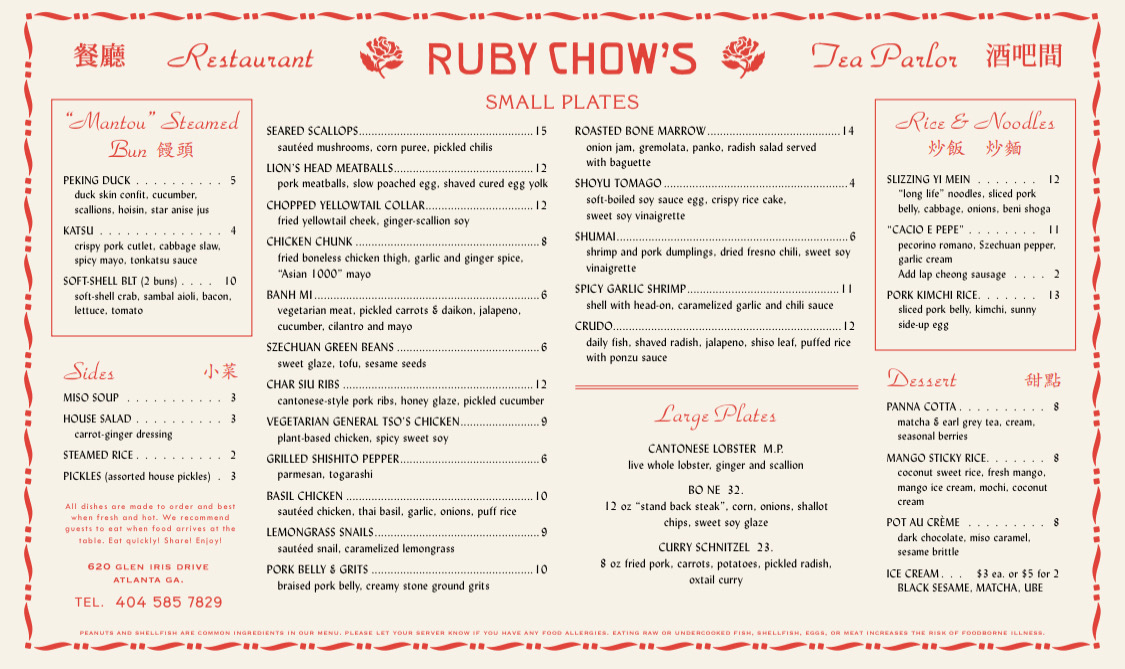