Rave
First-Class Service
I’m certain that no airport restaurant can compare to our very own One Flew South on Concourse E in the Hartsfield-Jackson International Airport. Since opening in 2008, One Flew South has succeeded in a mission that any restaurant would be lucky to claim: to represent the city with a worthy mix of inspired food, a smart beverage program, and extraordinary hospitality. Much of that buzz and warmth is embodied by head bartender Tiffanie Barriere, an immensely personable cocktail whiz who’s quick on her feet and deliciously dangerous with a shaker (try her sublime Cab Calloway made with Oloroso sherry, apricot, Angostura bitters, and dry vermouth). Executive chef Duane Nutter helms the broad menu, which swings from thyme-roasted pork belly to a Barcelona-style sushi roll with white anchovies. Recently at the bar, I overheard some London executives mention that they always stop in when flying through Atlanta. I can’t blame them.

Rant
Napkin no-no’s
It might sound petty for a restaurant critic to find fault with an establishment’s napkins, but as any chef will tell you, details matter. I frequently wear black, yet I detest black napkins. They may shed less, but they’re absorbency-challenged, since heavy dye has clogged every essential fiber. Limp polyblend napkins are another abomination. You can’t fold them properly, they slip off your lap, and they’re harsh on hands.

In an ideal world, all napkins would be white or cream, starched and ironed, and made of natural fibers. For casual dining, I prefer the new fashion for napkins that resemble striped tea towels or feature a discreet buttonhole. Casual goes wrong at Gunshow, where Kevin Gillespie seems to think that it’s cute to set the tables with bandannas. If I’m spending $100 on dinner, spare me from a thin, nonabsorbent throwaway that belongs on a camping trip. 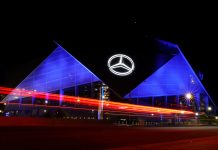